The Chainsmokers are slaying the internet with their newest single—Paris. The music is fresh and we eagerly await the remixes!

‘Paris’ is the duo’s follow-up to 2016’s super-hit track ‘Closer’, which was No.1 on the Billboards for 12 consecutive weeks!

The Chainsmokers haven’t pulled a sugary pop track like ‘Roses’ or ‘Closer’, but the track is warm and the guitar licks are nothing short of addictive. The electro-pop groove is refreshing and suits their original ‘Indie rock remixes’ roots that kinda faded away after they became big.

The lyrical video takes a similar route as the other singles: A gushy montage of model Alexis Ren frolicking on the beach. 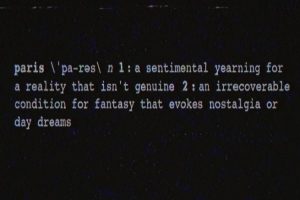 To be honest, we were sold when they released their own definition for Paris: “a sentimental yearning for a reality that isn’t genuine” or “an irrecoverable condition for fantasy that evokes nostalgia or day dreams.” Lyrical ingenuity at its best!

Taggart wrote on Twitter that he loves writing songs about small moments, which makes the song relatable and with lyrics like ‘Standing there with a frown and a cigarette, posting pictures of yourself on the internet’ they’ve struck gold in the relatability section!

We’re pretty sure this track is all set to become the party anthem of the season. Are you in the ‘Seen it before 1m views’ squad? Watch now: