Online Messaging App WhatsApp has rolled out a new feature for Android supported Smartphones that allows users to retrieve deleted media files. In other words, if you have accidentally deleted any images, GIFs, videos, audio files, audio recordings or even a document from the internal storage of your smartphone, WhatsApp will let you re-downlaod these files. Till now, users cannot retrieve files from their phone once they have deleted them.

If you wish to try this feature and many more, you can do this by enrolling into WhatsApp’s beta programme.

Any WhatsApp user can become a beta tester for the app. You can always opt out of the beta programme by uninstalling the testing version, and downloading the public version of WhatsApp from Google Play Store.

As per WABetaInfo, this feature is available for WhatsApp’s Android users. Earlier, Android users could download data that was up to 30 days old, but that data would disappear once the file was downloaded by the recipient. 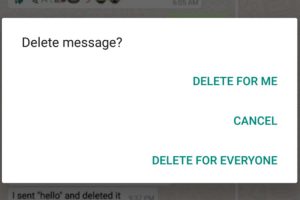 The report also says that that users can do so because WhatsApp stores media on their database even after users delete them. However any media older than three months cannot be downloaded hinting that WhatsApp has an expiry date for files stored in their database.

The latest update may trigger privacy concerns as its parent company Facebook is already under fire for leaking private information of users to a Cambridge Analytica a political data firm that worked on President Trump’s 2016 campaign.

Now, it’s inevitably clear that for the system to work, Facebook will need to store this data indefinitely. The social media giant does claim that all media files are encrypted, so there is at least some solace to be found there.