As Facebook deals with one its largest data breaches, WhatsApp’s co-founder Brian Acton has joined the rising chorus of people advocating deletion of Facebook accounts.

Acton, who sold the instant messaging platform to Facebook for $19 billion, took to Twitter and simply said, “It is time. #deletefacebook.”

It is time. #deletefacebook 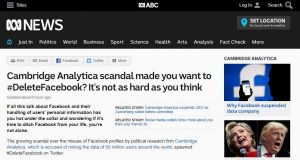 Facebook is already facing the heat for mishandling its user data. A series of reports in The New York Times, Observer claimed Cambridge Analytica, a political data analytics firm backed used by Trump supporters, accessed the personal data of possibly 50 million of the social network’s users without their permission.

The information was then misused for political ads during the 2016 US presidential election.

The reach allowed the company to exploit the private social media activity of a huge swath of the American electorate, developing techniques that underpinned its work on President Trump’s campaign in 2016.

Apparently, the leak happened in knowledge of the Facebook but the public wasn’t made aware of this news until this weekend.

We have had enough!! #DeleteFacebook pic.twitter.com/kqsTrbn0Gq

Facebook shares now down 12% since dropping off the cliff and still falling.#DeleteFacebook pic.twitter.com/5lAJISj9Ml

Facebook is a data collecting, manipulative and, in some cases, life-harming site that dont deserve a minute more of your time on earth.
#DeleteFacebook

How authorities have reacted so far

Meanwhile, some of the US Senators  have called on Facebook CEO Mark Zuckerberg to testify before Congress, on the grounds that the platform could no longer be trusted to police itself.

Senator Amy Klobuchar of Minnesota, a Democratic member of the Senate Judiciary Committee, said Zuckerberg should appear before the panel to explain what the social network knew about the misuse of its data “to target political advertising and manipulate voters.”

Adam Schiff, the lead Democratic member of the House Intelligence Committee said the company should be “thoroughly investigated”.

In UK too, MPs summoned Zuckerberg to appear before a select committee investigating fake news and accused his company of misleading them at a previous hearing.

In a letter to Zuckerberg, Damian Collins, the chair of UK’s powerful Digital, Culture, Media and Sport Committee, accused the company of misleading the committee over how third parties acquired and held user data from its site adding that the company needed to explain itself to the parliament.