How often has it happened that you kept staring at your laptop screen, waiting for the buffer icon to disappear? How often has your boss accused you of being sluggish when its the office internet which functions like a sloth?

While the rest of the country struggles to keep themselves awake while waiting for the internet to fire up, Chennai happens to be an exception as the city enjoys the highest broadband speed in the country.

According to a report titled ‘India’s Digital Divide: How Broadband Speed Splits The Nation’ by global Internet testing and analysis company Ookla, Chennai has the fastest broadband speed in the country with a ‘mean download speed over fixed broadband that is 57.7 percent faster than the entire country. The city enjoys a mean download speed of 32.67 Mbps and a mean upload speed of 26.15 Mbps.

Where do other Indian cities stand?
Shortly behind Chennai is the IT hub of India– Bengaluru with a mean download speed of 31.09 Mbps. Interestingly, four of the top five spots with the cities that offer highest broadband speed are occupied by cities from south India which include– Chennai, Bengaluru, Hyderabad and Vishakhapatnam. The only other city in the coveted top five slot is Delhi with an average download speed of 23.57 Mbps. 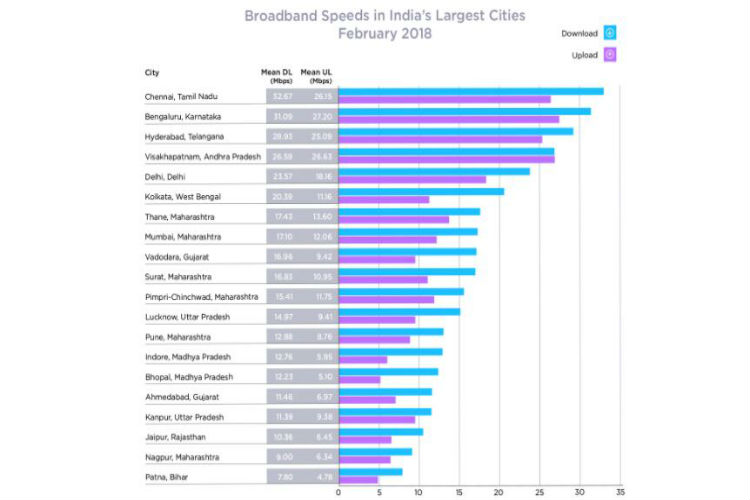 ALSO READ: Do you know who invented the Internet?

Where does India stand on a global scale?
While these statistics might paint a somewhat optimistic picture of the country, global statistics, however, tell a different tale. According to February 2018 report by Ookla, with an average download speed of 20.72 Mbps, India ranks 67th in the global broadband speed rankings.

ALSO READ: With no Internet availability for most Indians, how is Modi govt aiming for a cashless society?

The condition was far worse in case of mobile Internet speed. With an average download speed of  9.01 Mbps, India bagged the 109th spot in the global rankings. The top spot was bagged by Norway, which was followed by Iceland and the Netherlands on the second and third spots respectively.