When Dr Harshal Brahmbhatt, an occupational therapist at Integrated Physical Care Unit (IPCU) in Ahmedabad, started playing virtual games while pursuing his studies, he noticed that he was actually involuntarily working out — he started sweating, he noticed the movement of his muscles and how much his body had exerted. That was the moment he realised that virtual reality and virtual gaming might actually be applicable to his field as well.

So he called up one of his patients and asked him to try his hands out at his gaming console at home.

That was a eureka moment for Dr Brahmbhatt and he began asking his patients in the clinic to try out virtual gaming beside undertaking regular physiotherapy.

How does Virtual Rehabilitation actually work?

According to Dr Brahmbhatt,

“As occupational therapists, our main goal is that patient exercises through activities. Virtual Rehabilitation fulfils the same because in Virtual Reality, the patient gets an audio-visual power feedback and whichever activity gives you a good power feedback, then definitely you’ll give your 100%.”

Such a therapy can help manage various conditions, especially neurological conditions like for stroke patients, Progressive Supranuclear Palsy (which is a degenerative disease involving the gradual deterioration and death of specific parts of the brain), Parkinson’s disease, Juvenile polyposis syndrome etc. The exertion through gaming can also help improve the strength of ortho patients, especially those who have had a surgery. 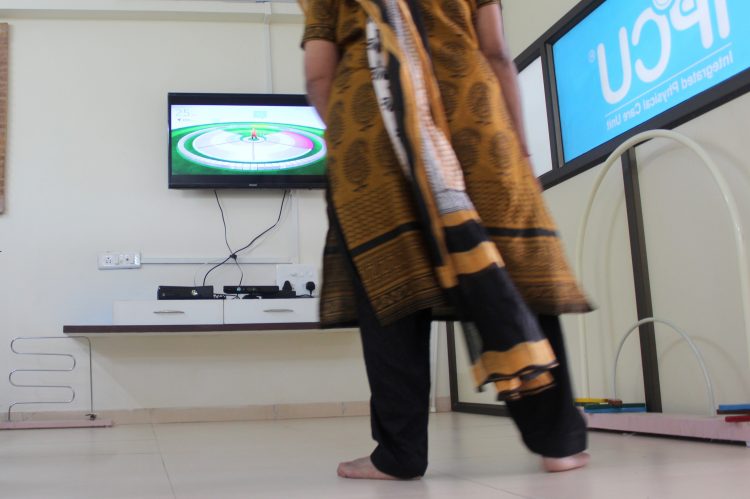 How does Virtual Rehabilitation stand out from other forms of therapy?

Because the patients are engaged in a game, they do not feel bored, like some do after undergoing prolonged recovery. Dr Brahmbhatt explained,

“If we look at any neurological conditions, the exercise treatment protocol takes a lot of time — even months or years. The patient, after some time, might stop doing the exercises altogether.”

After completing a game, patients get a score and what motivates them to continue with their therapy is the thought that they need to score better the next time.

A businessman, Nimesh Patel had suffered a paralysis attack after which he had to got to know about the use of virtual reality for therapy through a friend.

“It’s a game-based therapy so it’s quite entertaining. I’ve done regular therapy before and started to feel bored after a while but when I started playing virtual games (via therapy), I saw my avatar on the TV screen. Even the music is entertaining. After the game ends, I get a score after which I feel that I need to beat that score the next time.”