With trains in India perpetually getting delayed, keeping track of where your train can be quite a task. Enter ‘Where Is My Train’, which already has over 10 million downloads, making it one of the most used train-based apps in India right now.

The app uses information from cell towers instead of GPS or the internet to locate trains. The app is currently available in English as well as Hindi, Bengali, Marathi, Malayalam, Kannada, Tamil, and Telugu. With an option to use without the availability of the internet, the app can be used to spot train, check seat and coach arrangement, PNR status as well as live updates. It does so by integrating timetables of Indian Railways and IRCTC.

Before boarding the train you can also check the scheduled and expected time of arrival and departure by entering the station code or station name in the live station section. It also comes with features like destination alarms and a speedometer. 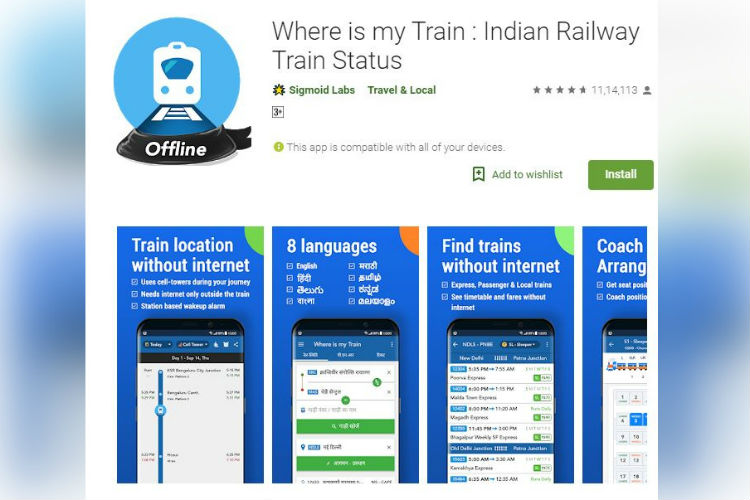 The Android-based app is currently the highest rated travel app in India. The app is currently available in English as well as Hindi, Bengali, Marathi, Malayalam, Kannada, Tamil, and Telugu.

Google recently acquired the Bengaluru-based startup Sigmoid Labs which has developed the app as a part of Google’s ‘Next Billion Users’ initiative. This is the search giant’s first such product acquisition in India. The company says its mission is to boost the world’s fourth largest railway network with the use of technology. ‘Where is My Train’ app competes with companies like RailYatri and iXigo that provide similar live updates.