Many companies like Apple, LG, OnePlus, Huawei, Motorola, Nokia etc have been jumping on the dual camera fad for at least 4 years now. So Samsung said…HOLD MY BEER!

Samsung launched its latest smartphone, Galaxy A7, at an event in Delhi today. The striking feature about this phone is that it doesn’t boast of two rear cameras. Nope. The manufacturers have rather slipped a third rear camera — just one less than the phone to look completely like a four-eyed spider.

These 3 cameras include one depth of field lens, one wide-angle lens and one autofocus-lens. The phone also has a 24-megapixel selfie camera with a Pro Lighting Mode. 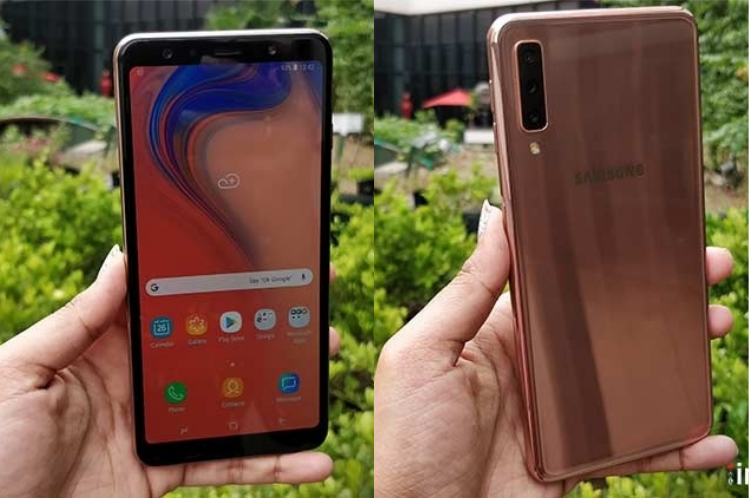 Though it’s not the first rear camera to be launched with 3 rear cameras. Huawei P20 Pro had 3 rear cameras but with the phone being priced at around Rs 65,000, the phone tanked in India worse than Titanic did when it hit that iceberg. Though with Samsung pricing its phone reasonably, it is expected to sail smoothly.

Samsung Galaxy A7 will come in four colour options — blue, black, pink, and gold. It’s expected to be priced at Rs 23,900 and will be exclusively available on Flipkart in India.

Other key features of the smartphone include a 6-inch full-HD+ Super AMOLED Infinity Display, Dolby Atmos audio technology, and a side mounted fingerprint sensor. The phone supports dual SIM technology and is powered by Samsung Exynos 7885 processor with 4GB & 6GB RAM variants. The Galaxy A7 has two onboard storage options — 64GB & 128GB with an option of an expandable microSD slot of up to 512GB. It also has Bluetooth 5.0 and a 3300 mAH battery.