Apple is known for its world-class gizmos and gadgets. The company was founded by Steve Jobs, Steve Wozniak and Ronald Wayne back in 1976 to develop and sell computers. It has come a long way since then developing an array of world class desktop computers, laptops, tablets and other smart home devices. The Cupertino-based company practically started the era of smartphone back in 2007 when it gave the world its very first iPhone. And ever since then, it has continued to stun the world with its out-worldly innovations and mind-boggling technology.

But do you know Apple also sells Apple shoes and Apple socks?

If you think that it is some sort of prank, then let me tell you something it’s not. Apple shoes and Apple socks are very much real and you can even purchase them on e-retail websites.

An exclusive pair of Apple sneakers is up for live auction on eBay.com that starts on June 11, 2017. The bid starts at $15,000 (Rs 9,65,000 approx) and the seller expects to sell the special sneakers for up $36,000 (Rs 23,16,500 approx). Admittedly, the cost can be a compelling factor. But these sneakers have a history. They were given out by the company to its employees in the 1990s, while it was still testing the prototypes. Nearly two decades later, these sneakers have surfaced again but this time as a vintage piece meant to preserved carefully. 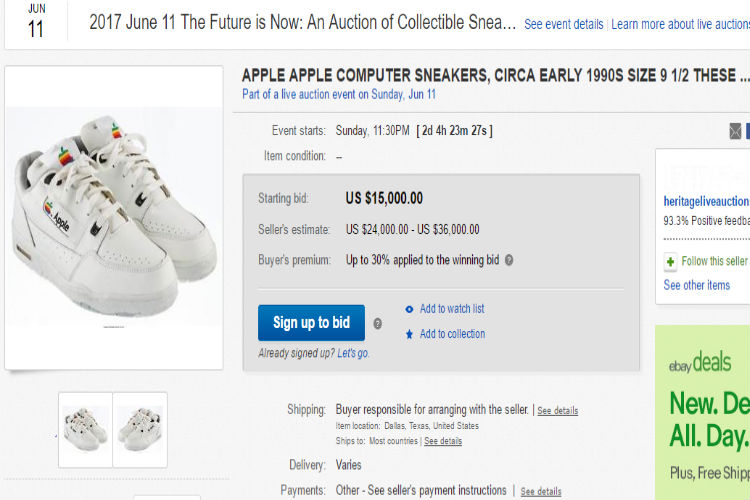 As far as the Apple socks are concerned, they come with a smaller price tag and are well within the reach of common man. You can buy a set of six Apple Socks on Amazon.com for just Rs 11,000.

So hurry up and grab a piece of history now!