Beverage giant Starbucks has opened the biggest roastery in the world, and it is in Japan. With an operational space of 32,000 square feet, the swanky four storey outlet will also be home to the world’s largest tea bar. The first floor has a bakery and a café, with about five different coffee beans from all over the world on offer every day.

The second floor houses the world’s biggest tea room, Teavana, where the selection includes traditional Japanese and Chinese green teas as well as black teas from all over the world. Whereas the third floor is a cocktail bar, Arriviamo, which offers drinks with a hint of coffee. The fourth floor factory also has a lounge area and workshop space. 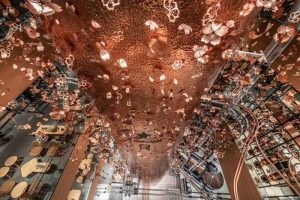 “After 23 years in Japan, I couldn’t be prouder of the innovation and passion our partners have brought to life at the Tokyo Roastery. Congratulations to Starbucks Japan on opening an incredible expression of Japanese culture and the romance of coffee. Beautiful!,” Starbucks CEO Kevin Johnson said in a tweet.

The Starbucks Roastery introduces customers to more than 100 unique coffee and tea beverages and merchandise, as well as a menu of artisanal Princi Italian fare for the first time in Japan. It also celebrates the Japanese culture of connection and craftsmanship through the first AMU Inspiration Lounge, reports Japan Today. It overtakes the one in Shanghai as the biggest Starbucks on the planet. 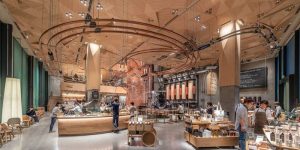