NAIROBI: Like many guys using the Tinder dating app, Sudan loves the outdoors and travels widely. The catch: he’s the world’s last male white northern rhino and desperately needs to mate. “I don’t mean to be too forward, but the fate of my species literally depends on me,” reads his profile. “I perform well under pressure. I like to eat grass and chill in the mud. No problems. 6 feet tall and 5,000 pounds if it matters.” Conservationists are hoping that Sudan’s Tinder profile will help them raise enough money for $9-million fertility treatment as all attempts at getting him to mate naturally have failed.

Scientists would use Sudan’s sperm to fertilise an egg from one of the two last northern white rhino females: 17-year-old Satu or 27-year-old Najin. The embryo will be implanted in a surrogate southern white rhino, a far more common species.

“We tried everything to get them to mate naturally,” said Elodie Sampere, the marketing manager at Kenya’s Ol Pejeta conservancy, where all three white rhinos are accompanied by 24-hour armed guards.

“When he first tried to mount the girl, the rangers guided him … but it is difficult with a rhino,” she said. 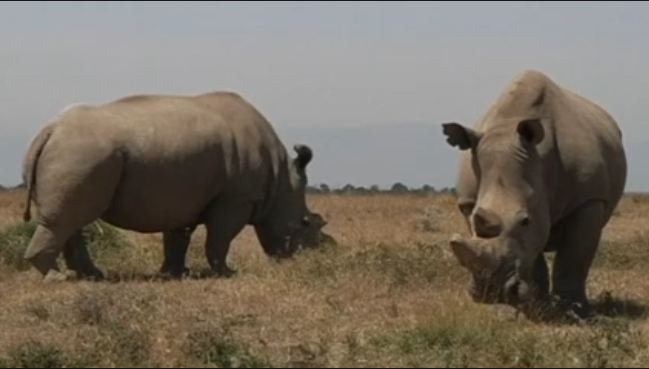 “We removed them from a zoo environment, which was not conducive to natural instincts, and put them in a semi-wild environment. There were a couple of matings, but it never resulted in a pregnancy.”

Poachers sell northern white rhinos horns for $50,000 per kilo, making them more valuable than gold or cocaine, and his keepers fear that Sudan, who at 43 is ancient for a rhino, may die or be killed before they can raise enough money.
“There’s always that fear. He’s old, he might die soon,” said rhino expert Richard Vigne, the CEO of Ol Pejeta. “As long as the demand for rhino horn in the Far East persists, there will always be an ever-present threat.”

Just hours after he went online, the number of hits was so high that the Ol Pejeta website crashed.