In light of the current events, where Peepli Live assistant director Mahmood Farooqui was acquitted by the Delhi High Court citing that a ‘feeble no’ does not amount to denial of consent, this woman shared her own ordeal of sexual assault. In a strongly worded tweet that Surekha shared screenshots of the Whatsapp conversations with her abuser, adding that “every woman has a story, this is mine. my message to someone several years after the incident took place. Sharing cos (sic) this is not my shame.”

More often than not, it is the woman who is blamed for the assault on her own person. Something that happened in the Mahmood Farooqui rape case. In a series of tweets before, Surekha commented on whatever the survivor in the said case would have gone through could actually have been true. She also raised questions over the words used by the judge in the judgement.

Surekha shared her story in solidarity with every woman who has ever gone through such an experience. For what people seem to have forgotten is that a survivor of sexual assault lives with the trauma for the rest of her/his life, even if a considerable amount of time has passed by.

this post provides a detailed analysis of the mahmood farooqui rape conviction over a year back: https://t.co/uaAV6saLUL

every woman who reads this will know exactly what the victim must have gone through and how every detail here could have been true.

now compare the trial court judgement to the high court verdict which says when a victim says no it could mean yes: https://t.co/tWbhh08dSV

the judgement further notes “the appellant had no opportunity to know that there was an element of fear” because she feigned orgasm.

why is this even under consideration when this act of feigning happened well after the rape started? how does it matter? just don’t get it.

not exactly what anyone wants to read early in the morning agreed but was thinking about the victim and what must be going through her rn.

it was with huge relief i’d read the trial court judgement details. to know finally law recognises the ordeal and trauma a victim suffers

the utter confusion, the cycle of blaming self, even protecting the damn rapist when one happens to know and like and even respect them.

every woman has a story, this is mine. my message to someone several years after the incident took place. sharing cos this is not my shame. pic.twitter.com/dUXxM8seuC 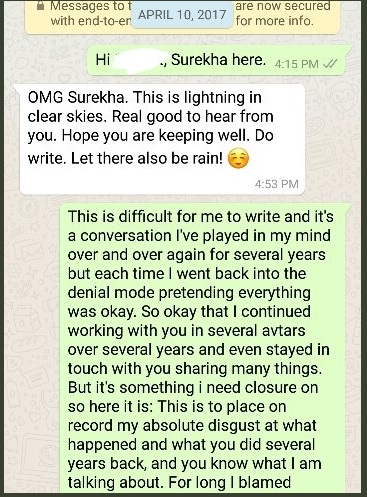 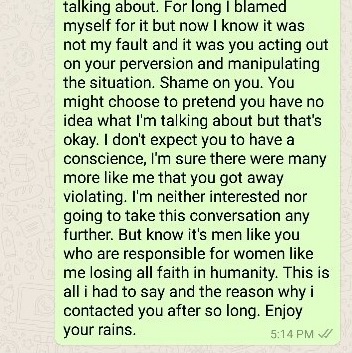 I understand what you’re going through, the raw nerve that the court decision touched. All words in the face of it will be inadequate.*hugs*

🙁 the lightning in clear skies should find and fry him.

such a big step to take. hope you feel good about this. you should — and you’ve probably given many people hope. hugs.

That is so brave of you. I can only imagine the strength it would have taken to confront the man like this. More power to you *hugs*

Oh God. Missed this yesterday. Horrifying to imagine what u must have gone thro to write this & have it all come back yesterday. *hugs*

You are brave. Addressing what happened directly and with such clarity is immense. *Hugs*

More power to Surekha and all women, who have ever gone through something like this.