Priya Prakash Varrier’s ‘winking’ love saga may have ruled the Internet as the classic story of young love, but a new video doing the rounds is here to dethrone it. The video, which hints at the budding Durga Pujo romance between a young boy and girl who first realise the potential of a whirlwind affair is everything the Bengali youth hopes pujos would turn out to be.

For the uninitiated, adults wait for Durga Pujo for the food, the adda (gossip), and the pandals, but for young people, Durga Pujo is almost as if Valentine’s Day visits twice a year. The video is a tribute to the age-old sparks flying in the air, hearts and minds of young couples ogling at each other. 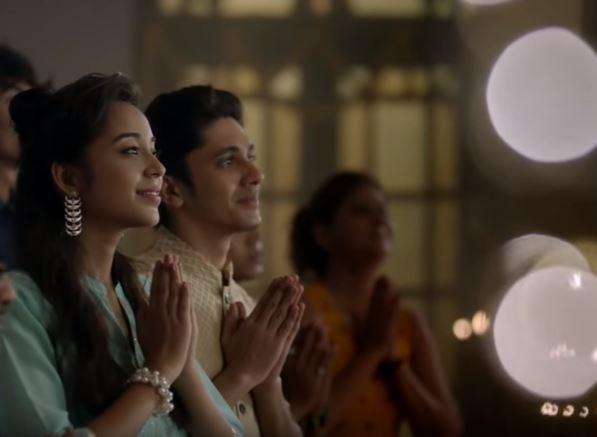 Screengrab of the ad. Credit: YouTube/PantaloonsFashion

It starts out with the girl protesting that even her brother’s friend, Sujay, calls her by the unfortunate nickname most Bengalis are saddled with. She protests, in the voiceover, that she’s still addressed as ‘puchki’ (little girl) although she’s all grown up and is now in college. What could be worse than going through the embarrassment of having your crush see you as a little girl. Puchki, whose name we later learn is Sohini, has probably been coddled all her life, owing to the nickname.

In this video, we gather that even her crush, her brother’s friend, has always treated her like a child. But, one day, staying true to the idea of Disney fairytales, the crush (aka Sujay) notices her in an attire that makes him see her in a whole other light. She is now someone he could fall in love with. Because all you need for true love is a great outfit anyway.

Once the guy notices her, it’s all hunky dory from there on. The next few days, she’s dolled up for his gaze and he finally addresses her as Sohini. Her brother soon figures out what’s happening and plays wingman, making the situation conducive for them to spend time by themselves. #BhaiGoals

As much as this video will make you smile like a fool, it unfortunately still subscribes to the idea that the girl has to dress up to get the attention of the man. Anupam Roy’s background score, Tumi Kothay, will tug at your heartstrings till you convince yourself that this is the way to a man’s heart.