The Asia-Pacific heads of Coca Cola have expressed interest in setting up a production plant in Sri Lanka to feed Indian markets, which has the highest demand of the product in South-Asia (Current market in India is said to be around US $5 billion).
The question here is WHY? Why do they want to set up a production plant for India in Sri Lanka? What happened to Coca Cola in India?

In recent years, Coca-Cola has been running into problems due to excessive water usage by the production plants. Protests have arisen due to the high level of water usage by Coca-Cola, which has led to water shortage in those areas. They were going through major problems in maintaining their workflow and have shut down three production plants due to protests by social activists who blamed the Cola company for depleting underground water levels and causing problems to the agricultural activities in the region. They have been drawing so much water that the water table in surrounding areas has depleted.

The following report published by CSR-Asia highlights the menace caused by Coca-Cola plants in the country: 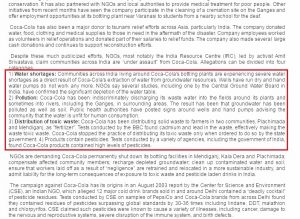 The reason WHY social media is talking about this move by Coca Cola:
The main reason the cola producing giant wants to shift there is to export beverages to India. This clearly implies that there will be large scale production. Just a few days ago, Sri Lanka has warned of worst drought in 40 years.
The Sri Lankan government has declared a state of emergency stating that the situation may lead to social instability in the country where 31.8 percent of the inhabitants are directly dependant on agriculture for their livelihoods.

To counter this argument, Coca- Cola officials have pointed out that setting up a production plant there will lead to excellent foreign exchange opportunities and generate ample employment opportunities.
Even though this seems like a good opportunity for the economy, it would be an environmental disaster.

What are your thoughts on this issue?