Gormint aunty is by far the biggest and dankest meme India has ever witnessed. We don’t even need to introduce her.

The middle aged woman, who while giving an interview to a news reporter is seen abusing the Government of Pakistan and dropping every cuss word known to mankind, became the first Indian viral moment of 2017 as the video did rounds on social media.

The Pakistani government is pretty infamous being corrupt. In 2014, Pakistan scored 126 out of 174 on the Corruption Perceptions Index published by the Transparency International, it’s previous score being 127 out of 175 in 2013.

Most civilians struggle to make ends meet and the corrupt government officials fail to provide basic amenities to the people of Pakistan, despite the taxes. Even though India isn’t as bad, our tales of corruption are well known too.

Watch the aunty in all her ‘Gormint-shaming’ glory here:

Ever thought how the country would change if she became the Prime Minister? We let our imagination run wild and this is what we came up with:

Aunty isn’t a big fan of censorship. That’s pretty clear. Say whatever you want because no one’s getting arrested.

Aunty hates the government because ‘Bik gayi hai Gormint‘. Not anymore. Your favorite chocolate brand isn’t available at the store next door? They telling you your shampoo won’t be restocked until next month? Not under Gormint aunty’s watch.

April fools day would be banned

Aunty clearly knows how to take care of her kids and the youth will be way happier once she is the prime minister.
We mean, do you see how happy this kid is? 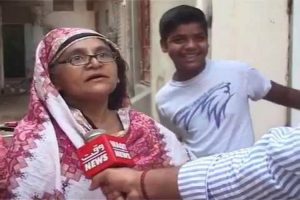 All artists labelled as ‘sell-outs’ by the general public will be banned.

All jokes apart, it’d be amazing to watch someone as bold and fearless as Gormint aunty running the country, wouldn’t it?