“Neta abhineta bhi hote hai”…Politicians are also actors. Going by this age old adage of Indian politics, Sasikala clearly doesn’t qualify to be a politician. For she is a terrible, terrible actor. Well, we would have accepted her as a politician if she had matched up even Katrina’s cold vibes and expressionlessness on screen. But, Sasikala, Amma’s supposed soul sister, now named Chinamma even beat Kareena Kapoor’s over-acting in K3G as Pooh and then of course the nightmare of all millennials – Main Prem Ki Diwani Hoon. Her acting was so bad that she couldn’t convince us that there was even an ounce of the grace that her mentor Jayalalithaa carried. It’s true that the two were accused in the Disproportionate Assets case together; the verdict in the case eventually led to the end of her dream of becoming the chief minister of Tamil Nadu.

But the poise and dignity carried by Jayalalithaa,  whose legacy and image, whose closeness and friendship she wanted to cash in on, is something that she can never match up to. Her bizarre theatrics today from sitting and meditating in the MGR memorial to thumping twice at Jaya’s grave and then murmuring something in a state of delirium looked like a sequence from a badly scripted film with a really really bad actor at the centre. The minute to minute focus on the route she took to eventually reach her destination Parappana Agrahara Central Jail in Bengaluru, after being convicted in DA case by the Supreme Court was equally bizarre. It was made even more bizarre by her trying to play to the gallery, the last bit of public life she was allowed, before she would become prisoner number 9435. Apparently, the focus on her was such that we know she will make candles and incense sticks.

As through the day, she went on to becoming from a wannabe politician and a power crazed woman with no political knowledge or administrative experience to run a state to the biggest newsmaker , social media did it’s best to maintain equilibrium in the world. It cracked some sobering jokes to bring her down from the high pedestal that the mainstream media had placed her on.

Be careful in what you desire.
Sasikala wanted a 4 year term & she got it.
Life has a very strange way of granting one’s desires.
~~Twitter

So Sasikala wants mineral water; domestic help; hot water; home cooked food and a TV in prison! Why doesn’t she stay at The Hilton?? Dolt. 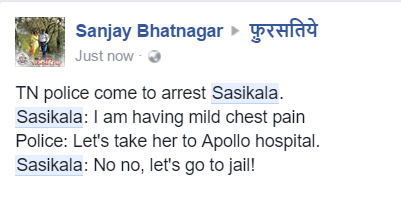 BTW. As per latest news, we also know that Sasikala will be given three crisp cotton jail saris to wear during her stint in jail, she will be given no VIP treatment and and and another nugget before we close this utterly useless overflow of information on Sasikala… after being convicted in Disproportionate Assets case, she will earn a meager Rs 50 for making incense sticks in jail. Karma truly is a bitch!