A man in China saved his six-year-old son from a human trafficking gang after he bumped into the boy nine months after his abduction. The kid, identified as Cheng Jiafu, was with three men at a shopping centre in Chinese region of Qingxin, where his father Chen Zhonghong spotted him.

Jiafu was abducted from his family home in Matang Village in Qingyuan region nine months ago, where he was being cared for by his elder sister. After his abduction, police launched a massive search operation to find the kid. However, cops were unable to find him. 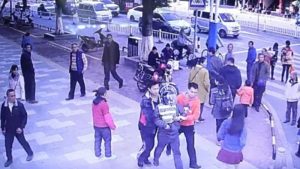 Nine months later, Mr Chen was walking through the Qingxin Town Plaza when he spotted the boy with three suspected human traffickers.

According to Qingxin News reports, without letting the traffickers notice, he grabbed his son and then notified the police around him. Officers quickly arrived to arrest the trio, who were known by their surnames, Chen, Li and Ou.

Chinese courts sentenced the men to a total of 11 years in prison on Saturday.

You can watch the video here: