Bangalore: Mythri Manjunath (25), found an infant in a miserable condition on the pavement inside her apartment complex on Begur Main Road, near Electronics City after being informed by two youngsters from her neighborhood. She called up her friend and asked the gathered people to accompany them to the hospital but nobody came up to help the two women.
She and her friend struggled to save the baby while people passing by just clicked pictures and enjoyed the show.

“We asked the people in the apartment, especially the men, if they could accompany us to the hospital. But nobody wanted to get involved in the case. They just stood there clicking photos,” said Mythri. They dialed 108 for ambulance and about 45 minutes later they were taken to Indira Gandhi Institute of Child Health Hospital.

“The doctors immediately started treating the baby and saved her life. The two were taken to the Siddapura police station nearby after admitiing the baby safely in the hospital, where the police took their statements. They were then asked to file a complaint with the Electronics City police, which they did. 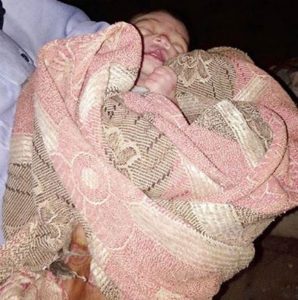 The baby is still under treatment

They got a call from the police on their way back home to inform them that the woman who gave birth to the baby lived in a slum next to their apartment. The woman had told the police that she didn’t want the baby and had left her at the apartment.

The police requested them to convince the mother to take the baby back. “We decided to help out and went to the slum where she lived. It was unnerving. Also, we were shocked to see that she was packing up to flee! It was hard to believe that she had just given birth. We spoke with her, but she was determined about not wanting the baby,” she said. But finally they convinced the mother to keep the baby.
They found out that poverty and fear of social stigma were likely to be the reasons why she had abandoned her newborn as the woman was a widow with a 16-year-old daughter and a 10-year-old son.
After giving birth to the baby (around 8 pm), she put it in a plastic vegetable basket and left her at the apartment pavement.

Next day, the police took the mother to the hospital and left the newborn in her care . The baby is still under treatment but out of danger.