Legendary photographer Annie Leibovitz, actors Tom Hanks, Nicole Kidman, Robert De Niro, Oprah Winfrey, Reese Witherspoon and Zendaya together on one platform would make for one hell of a photoshoot, right? That’s exactly what the internet was expecting from Vanity Fair’s latest cover and while the pictures were phenomenal, something wasn’t quite right and people were quick to take notice.

For several decades, Vanity Fair has brought together a jaw-dropping collection of Hollywood’s finest actors for its Hollywood issue. Turns out, this year they decided to bring out some extra limbs too!

Check out the picture:

While Reese Witherspoon lookings gorgeous in the photo, she appears to be have extra leg. Bad photoshop much? Here’s how Twitter reacted to the extra leg:

im tryna figure out how many legs reese witherspoon’s got in here, it’s been bothering me for the last five minutes pic.twitter.com/u1uQ63sDdd

She took a leg from zendaya. Where does her leg go? pic.twitter.com/49THsQVTko

I don’t consider Reese as sitting on Oprah but I do wonder about Reese’s 3 legs??? pic.twitter.com/MSgx2ODkXH

Imagine the millions of dollars that have been spent digitally removing Reese Witherspoon’s third leg from films and TV shows over the years. pic.twitter.com/mawsX6WLZ9

Reese had a sense of humor about the whole thing too:

Well…I guess everybody knows now…I have 3 legs. I hope you can still accept me for who I am. _( and I will never apologize for snuggling @Oprah .. if you get the opportunity, I highly recommend it;) https://t.co/6GyrfWxNSY

This wasn’t the only mistake people found in the photoshoot, can you spot what’s wrong with this one: 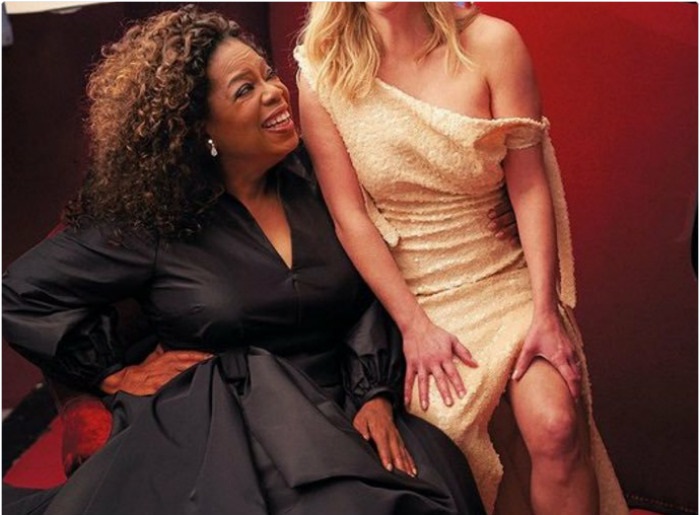 Yes, Oprah appears to have a third hand. Twitter freaked out again:

And Oprah has three hands pic.twitter.com/M0sKfaSCfZ

That’s it, they’re all aliens. Or it could be photoshop… no, definitely aliens.

Oprah decided to laugh at it too:

Vanity Fair tried to pass Reese’s third leg as a visual trick caused by the lining of her dress:

While we would have loved the exclusive on @RWitherspoon‘s three legs, unfortunately it’s just the lining of her dress. https://t.co/HJjvbc037S

As far as Oprah’s photoshop fail goes, they tried to laugh it off too – asking how Oprah could be expected to juggle everything with just two hands?