The age old debate of ‘How a dog would wear pants’ is well known to all of us. When the question first popped up on the internet in 2015, it sent everybody into a frenzy.

It became one of the most debated topics on the internet with everyone putting in their 2 cents of knowledge and trying to solve the question.

The question was solved, but since we never got any physical proof, it still lingered in our minds. But not anymore! A dog was recently photographed wearing pants and it has settled the debate. Forever.

Back in 2015 the question bamboozled everybody:

And then they settled it:

But they were WRONG.

2 years later, here is an actual image of a dog wearing pants that will change your life forever: 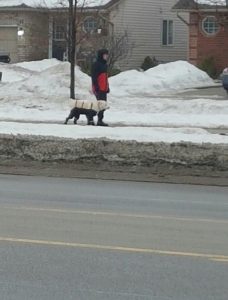 @memeprovider my life is complete

@Emily_Marshall_ @memeprovider oh my god we have an answer but what about ties on giraffes ??

Now if someone will solve this, I’ll be done for the year thanks.

Also, please let me know was that dress golden or blue.