Yesterday, Twitter went berserk after Ronit Roy posted his picture on the microblogging site with the Union Textile Minister, Smriti Irani with the caption, ‘What are the chances??!!! So lovely to meet Smriti Irani on a flight’. Every 90s kid ought to remember, Ekta Kapoor’s popular and forever-running show, Kyunki Saas Bhi Kabhi Bahu Thi. The show which kickstarted Smriti Irani’s career and cemented her popularity among the TV-viewing masses. Smriti and Ronit played the famous  Tulsi and Mihir Virani . Some on Twitter expressed their nostalgia, others had a major fan moment. But most of the jantaa however could not stop LOLing. Some of the reactions were absolutely hilarious. 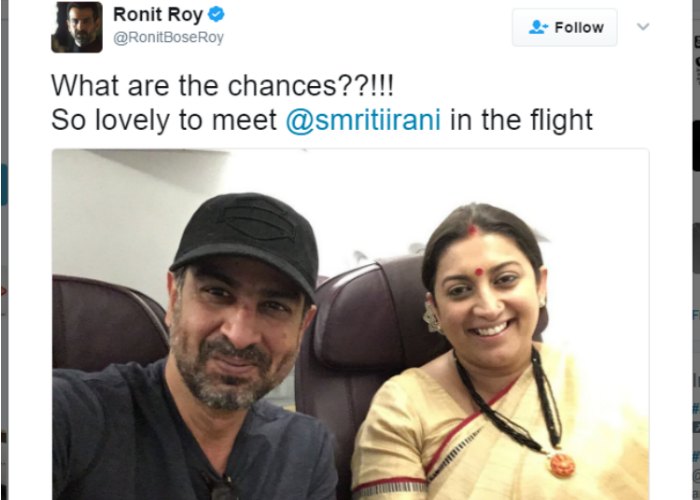 2. No doubt about this one. @SunnyShines is an absolute fan.

3. Here’s a Smriti Irani or a Tulsi fan, not as much a fan of ‘Ronit Sir’. Sorry Ronit Roy.

@RonitBoseRoy @smritiirani Never saw a single episode.Glad to know you are the one who acted along with Mrs Irani.

6. Here’s some general knowledge guys, in case you did not know what these two are up to these days.

7. Some of the fans want to see these two in the movie together and some on television. Wow, but how?

@RonitBoseRoy @smritiirani Any chances of two of you doing a movie together ?!

9. Some also mistook Ronit for actor, Akshay Kumar, for his physique. Wait, really?

Looking great and fit as ever. @RonitBoseRoy Mistook you for @akshaykumar for a second!!@smritiirani

10.  Some even remember the background music when Mihir and Tulsi used to meet in the show. Woah! what dedication.