As he was being taken to his own funeral, A 17-year-old boy from Karnataka woke up on the way, shocking everyone.

This happened in Dharwad’s Managundi village, as reported by TOI. His relatives and villagers had presumed him dead and when he woke up, they rushed him to a private hospital where his condition is critical currently.

The boy, named Kumar Marewad, was bitten by a stray dog about a month ago. He had high fever since the past few weeks post which he was admitted to a hospital. Even after being put on a ventilator, his condition didn’t get better. Doctors has given up at this point saying the infection had spread to his entire body and he wouldn’t survive without a ventilator. 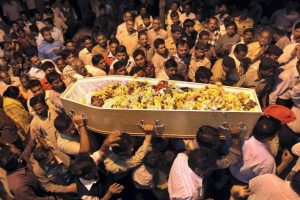 When they took him home, he wasn’t moving or breathing. Presuming that he’s dead, they took the body straight to the funeral grounds to perform his last rites.

To their absolute shock, barely two kilometres from the location where the funeral was to take place, Kumar opened his eyes, moved his hands and legs and started to breathe. He was rushed to nearby hospital on Gokul Road as soon as possible where doctors examined him again and said he is suffering from severe infections.

While this seems to be a case of ignorance on the hospital’s part too, we hope the family takes care of the boy and he is back on his feet soon!