Sexual harassment can have many forms and it can happen with anyone. While most people think it is only and mostly women who fall prey to such behaviour, men, transgender, bisexual, queer anyone can experience sexual harassment and it is a fact. A tweet posted by one such man, who received an unwelcome message from a customer he served, went viral and Twitter just cannot stop feeling disgusted about it. The man in question, Troy Hibler, happens to be a waiter at a restaurant in Texas, USA and the woman visited his restaurant.

To like someone, feeling attracted to someone is only normal, but some people miss the fine line between flirting and going overboard. The woman, whose full name Troy hasn’t shared on his Twitter, visited the restaurant where Troy works as a waiter. She was there with one of her friends and took almost immediate fancy to the waiter who was serving her, and clicked a few photographs with him. She posted them on her Facebook account (of which Troy, later, took a screenshot) with the description: “Having lunch…got the best handsome gentleman waiter with the sexiest eyes I’ve ever seen…”.

She, then, sent him a friend request. Harmless, you think? Wait for it.

It was an interesting day… pic.twitter.com/D4x0exmh3f

By any measure, that last line and this approach is absolutely unacceptable and it was then that Troy posted these screenshots and set the Twitter buzzing. Apparently, the woman works as a substitute teacher at a school and many of her students identified her. Although some people found it funny, some immediately noticed the use of perverted language. 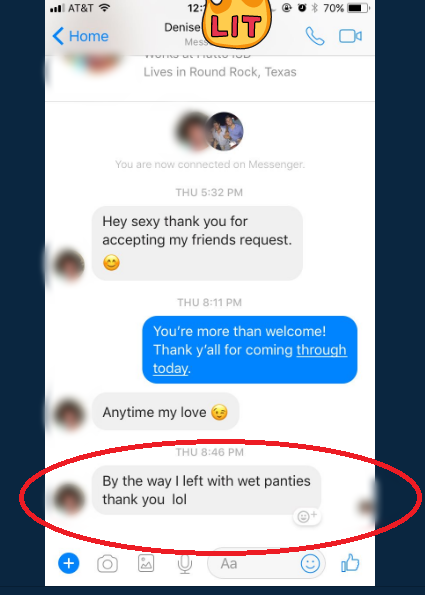 behalf of all the Hutto isd we don’t want her pic.twitter.com/sKLGWiJA5p

(Also read: Man sends stranger dick pic. She sent it to his mom. His response will make you angry-cry)

All due respect, I hope he is safe. People are absolutely monstrous at times, & things can escalate. She shouldn’t be working in a school. pic.twitter.com/eWOwzd2e6G

This actually made me uncomfortable for him.

What do you think about this entire episode? Share your thoughts in the comments section below.