The deadly New Year’s Eve attack in Istanbul shook the world as a man gunned down 39 people in a nightclub.
A plethora of people gathered to celebrate the end of 2016, only to become the unfortunate victims of a vile attack in 2017.
Of the 39 who died, twenty seven were foreigners including two citizens of India. One was film-maker Abis Rizvi, the son of former lawmaker Akhtar Hasan Rizvi and the second was Ms Khushi Shah from Gujarat.

Turkey’s Prime minister has released a statement saying the man suspected to be the gunman behind the horrendous act of terror has been detained. The media reported on Monday night that the man, operating under the name Abu Muhammed Horasani was found in his hideout accompanied by his four year old son.

This image of the detained man has gone viral on social media networks: 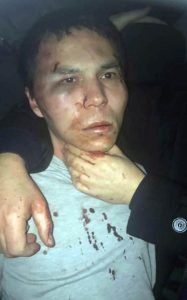 A number of people have been detained previously in connection to this attack which ISIS (Islamic State of Iraq and Syria) claimed responsibility for after a few days of the massacre. They stated it was revenge for Turkish military involvement in Syria. It is clear that the act was carried out for Daesh.

The government spokesman came out to congratulate the Turkish police:

He said:
I congratulate all our police officers who have captured the perpetrator of the massacre in Ortaköy. Our war with terror and the forces behind it will continue till the end.

The wife of the suspected culprit has denied having any knowledge about her husband being behind this or having ties with ISIS.