When there’s a will, there is surely a way. This has been proven by a group of 167 young students ranging from class 6 to 11 who entered Guinness Book of World Records on April 20 for creating the largest paper cup mosaic. This group of ambitious students are from Camford International School in Coimbatore, Tamil Nadu who paid their respect to former President APJ Abdul Kalam by making his face using 2.35 lakh cups to create the image in 10,560 square feet area. 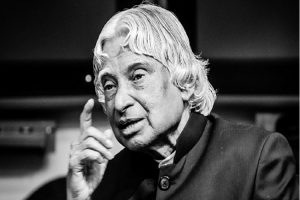 The image was made using typically four shades of coloured paper cups which are black, white, blue and orange. The event took place in presence 8 surveyors, judges and witnesses. It almost took them 3 hours to cover the whole area and complete the image.

On why they chose to create our beloved Missile man, Poongothai Arun Ramesh, the school administrator said that it was their way to bid respect to the man who is an inspiration to the children and the community.

This is the second participation in the Guinness Book of World Records by the school. The first was in 2013 as part of ‘Save Tiger’ campaign where in students created a mosaic of a Tiger using 35,000 postcards.

To proof their astounding feat, a recording of the video along with student’s affidavits has been sent to Guinness as evidence.