It’s pretty a pretty grim situation in the US right now. With Trump taking over and issuing bizarre orders, the nation is seeing a new political low.

Trumps executive order on the Muslim Ban temporarily halts citizens from Iran, Iraq, Libya, Somalia, Sudan, Syria, and Yemen from entering the United States for 90 days. The directive has been criticized by everyone around the Globe.

A plethora of celebrities and organizations have come together to stand against these actions, and Starbucks is one of them.
Starbucks CEO Howard Schultz sent out a company-wide letter following President Donald Trump’s decision to sign the executive order and banning citizens of seven majority Muslim countries from entering the United States.

“We are living in an unprecedented time, one in which we are witness to the conscience of our country, and the promise of the American Dream, being called into question,” Schultz wrote.
Schultz’s letter went on to elaborate some of the actions the company is planning to take, including plans to hire 10,000 refugees. 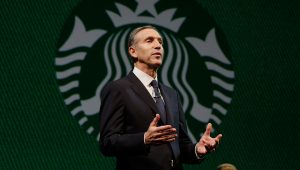 “We have a long history of hiring young people looking for opportunities and a pathway to a new life around the world. This is why we are doubling down on this commitment by working with our equity market employees as well as joint venture and licensed market partners in a concerted effort to welcome and seek opportunities for those fleeing war, violence, persecution and discrimination,” wrote Schultz.

He added: “There are more than 65 million citizens of the world recognized as refugees by the United Nations, and we are developing plans to hire 10,000 of them over five years in the 75 countries around the world where Starbucks does business. And we will start this effort here in the U.S. by making the initial focus of our hiring efforts on those individuals who have served with U.S. troops as interpreters and support personnel in the various countries where our military has asked for such support.”

Since social media users in Mexico had called for complete boycott of US companies including Starbucks after the ‘wall’ debacle, he also wrote about Starbucks’ operations in Mexico and how they stand united for their love of coffee across borders.

Here’s another reason for you to grab your favorite Starbucks!