The Ring was a movie that gave us nightmares when we were kids..and now it’s back with its latest installment to haunt us.

This installment is about a young woman who is worried about her boyfriend exploring a dark subculture surrounding a mysterious videotape that allegedly kills whoever watches it after seven days. She sacrifices herself to save him and in doing so makes a petrifying discovery: there is a movie within the movie that no one has ever seen before!

Undoubtedly, one of the most iconic moments in the horror genre over the last few decades is the moment when ‘Samara’ comes out of the TV in the original movie. Keeping that in mind, the filmmakers gave the movie promotions a bizarre twist.
They played a prank on unsuspecting customers in a TV showroom by re-enacting the iconic ‘The Ring’ scene and having Samara pop out of the television set on the wall and surprise people! 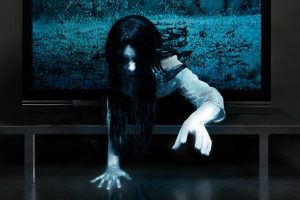 In the video, customers can be seen chatting with the store representative who is giving them information on the different TV sets as the trailer for “Rings” is playing on all the screens behind them. He then excuses himself for a second to change the batteries on his remote and as soon as he leaves, Samara begins to emerge from one of the screens.
Obviously, most people were frightened and two young men hilariously ran away knocking a box over on their way out.

The video has received a staggering 183 million views on Facebook and is indeed one of the best promotional gimmicks we’ve seen in recent history.

“You know the rules — first you watch it, then you die.” the Facebook page for “Rings movie” captioned the video.
Check out the crazy prank here:

After seeing this video, we can’t wait for the movie!