Every now and then you’ll face people who will try to drag you down. You can either be affected by their words and pummel into depression or you can come out a stronger person. The latter is exactly what Satyapal Chandra did.

He comes from a remote village called Malhari, situated in the Gaya district of Bihar. He belonged to a very small farmer family and had a very rough childhood facing all kinds of problems like poverty and violence. His village was infested with naxalites and he had to move to Jharkhand.

His original name was Ravi Shankar. He completeded his education from a government school situated in Pandeypura, Chatra, Jharkhand.

He finished his education in Hindi and after completing his Higher secondary examination, he decided not to continue with his education and moved to Delhi. Initially, it was a phase of constant struggle and he worked for various companies occupying various designations. He was laughed at for not being fluent in English. 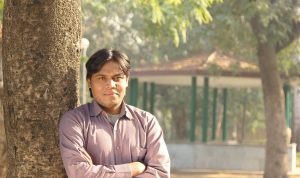 He took is as a challenge and enrolled himself in School of Open Learning, University of Delhi to obtain a graduation degree. His academic accomplishments included various accolades and awards and he went on to write 10 best selling novels in English, namely:

He is an established novelist now, but still writes an communicates in Hindi because he is proud of his roots.