Just when it seemed like the iconic Yash Raj romance was leaving Bollywood, Aditya Chopra’s 2008 romantic comedy/tragedy movie Rab Ne Bana Di Jodi came to the rescue. This Shah Rukh Khan-starrer breathed new magic into the romantic scene and also served as Anushka Sharma’s debut, who is today one of the biggest stars in Bollywood. The film also did well at the Box Office so, it is safe to say that it is was all in all a hit.

And now that the same jodi is coming back on screen for Imtiaz Ali’s Jab Harry Met Sejal, we absolutely had to watch the film and remind you just how mind-blowing their first film together was.

If you manage to look past how great Shah Rukh Khan is and how Anushka Sharma is not just another expressionless pretty face in a debut, Rab Ne Bana Di Jodi is pretty much a happy-sad cringe fest. For RNBDJ virgins, here’s the gist:

Depressed woman marries random dude who then hits on her in a different guise. Depressed woman starts liking random dude in disguise, further complicating her failure of a marriage. When the truth comes out, they live happily ever after. Oh! And she loves to dance or something ’cause… Bollywood y’all!

Still confused? We’ve got your back. Read on:

The film begins with an ill-fated groom tragically dying. The dulhan‘s daddy has a heart attack upon hearing this because, what’s sadder than one death, Mr Aditya Chopra? Two people dying, obvs.

Being totally sound of mind at his death bed, the heroine’s father asks his own daughter to marry a random dude. Said random dude (Surinder Sahni) has BTW volunteered to marry a total stranger out of the kindness of his heart and her sizeable good looks.

The importance of being adarsh

Not that there’s anything wrong with Surinder (yet) but, Taani doesn’t exactly know the guy. What is this 80s Indian arranged marriage situation? Why are we teaching kids (and highly impressionable parents and relatives) that the way out of a tragic situation is marriage? 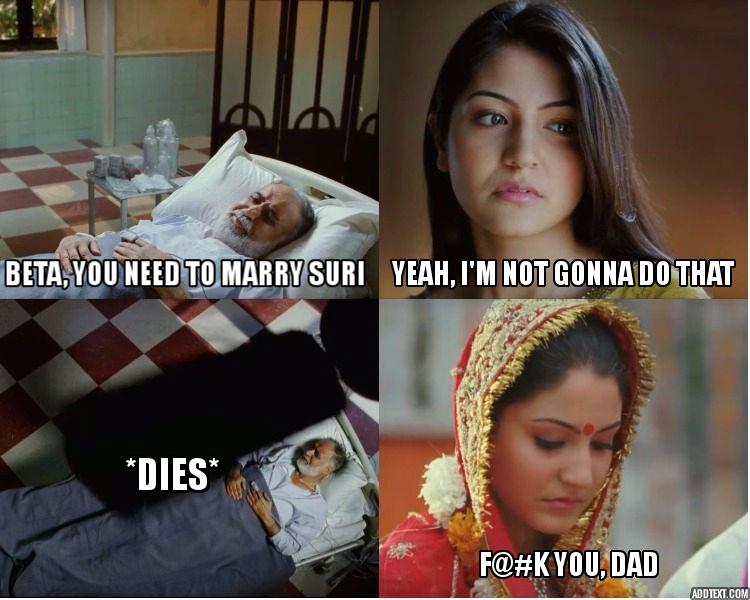 Surinder provides Taani with the one thing she needs most- SPACE. 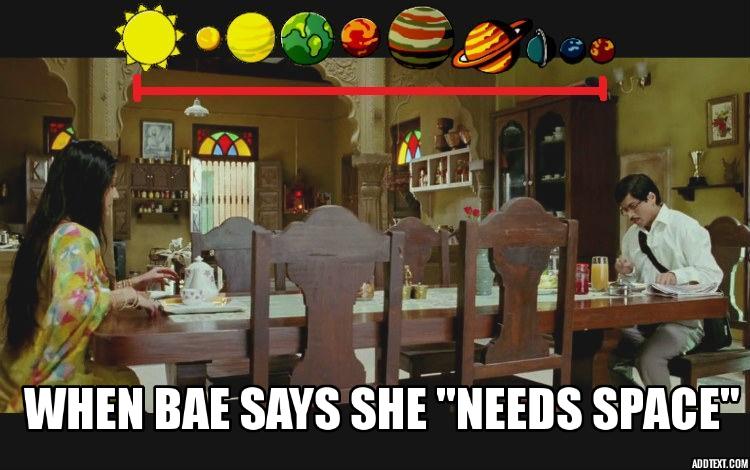 MAYBE he went a little overboard. He pampers Taani with movies at the theatre every now and then, but mostly the two act like they are buddies who owe each other money.

To keep the audience interest alive, Adarsh Aadmi falls in love with Adarsh Naari but, said Naari wants to have nothing to do with him. While he sings and shows off his daddy moves in the middle of the street while people pretend he is invisible, the always-angry Taani decides to take up dance classes. No, seriously.

This move by Taani leads to the most obvious reaction on Surinder’s part. He gets a makeover, dons a new (sadak chaap) persona to flirt with his wife ‘as a stranger’ because nothing heals a non-existent marriage like an extra marital affair (or at least the pretense of it).

Now, as we all know that a makeover totally gives you a new personality (source: Bollywood), Surinder becomes Raj, a douche who walks like he is wearing diapers and has a permanently unhinged jaw.

At first, Taani is utterly repulsed by the man in skin-tight clothes and knock-off accessories who probably reeks of hair gel all the time, but then she commits one grave mistake- she doesn’t tie Raj a rakhi. And you know what that means… Dilwale Dulhania Le Jayenge.

No idea how to sub-title the next bit

Now, onto the pot of crazies that is Surinder Sahni, the man makes no sense at all. “Suri ka pyaar ab Raj aapko dikhayega.” Like, boy, would you stop toying with her feelings? You’re literally just trying to make your wife fall for two people. How is that going to make things any easier?!

And WTF… His wife is so freaking clueless, she doesn’t even notice it’s the same guy?! Somebody buy this girl a copy of ‘1001 Ways To Tell Whether The Man Hitting On You Is Your Husband In Disguise’ please.

ALSO, ALL HE DID WAS SHAVE OFF HIS MOUSTACHE AND BOUGHT A DISGUSTINGLY CLINGY WARDROBE. YOU BLIND, BRUH? 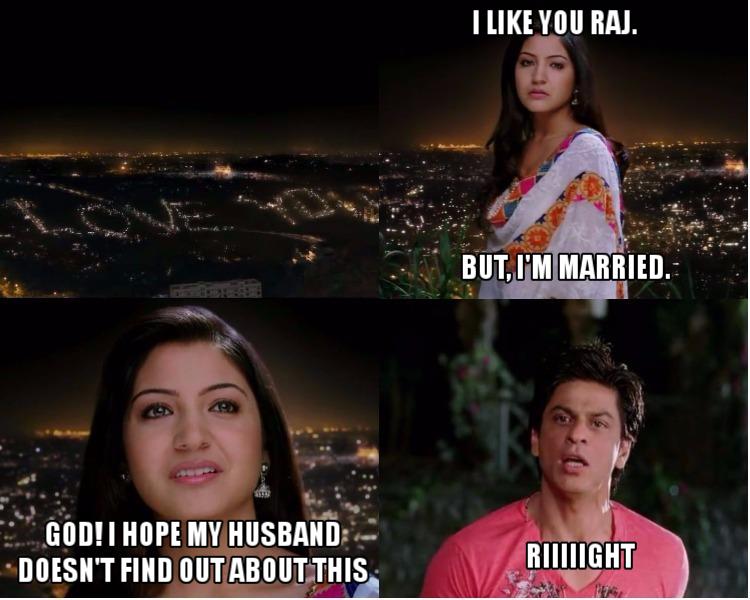 After making plans to elope with her disguised husband (WOW!), she ditches him ’cause she didn’t see “Rab” in anyone until… *Enter Surinder* (the guy was literally there THE WHOLE TIME)…

So, wifey ends her affair with creepy guy to go back to her husband who was actually the creepy guy all along and is legit 10X creepier. All’s good, right? NOPE! Taani finally figures out that Raj was Suri. And never in a million years would you have thought that the 1001 ways of doing that would ever include dancing… 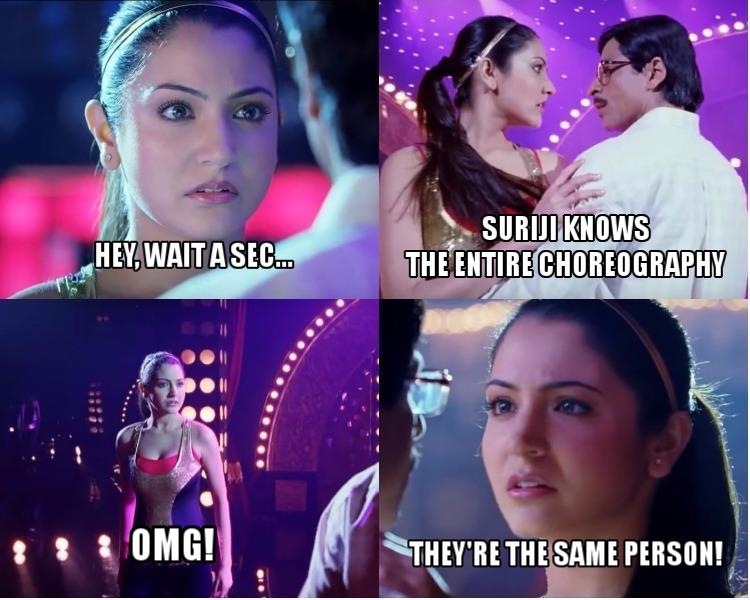 Girl, you alright? Get yourself a PET scan, FFS.

So now, the confrontation you’ve all been waiting for. What would Taani do? Will she be angry? Will she be offended and dump Surinder for toying with her feelings? Or, will she accept him, regardless of his douchebaggery and generally bipolar behaviour, and go with him to Japan to spend their honeymoon?

Yes, fam, you guessed it riiiiii…ght.