Biryani lovers all over the world almost had a mini- heartattack after seeing how one of the Pune restaurants tried to ‘re-invent’ their favourite food. A Pune eatery came up with a brand new dish called Pasta Biryani, yes you read that right, which has quite rightly outraged millions of Biryani lovers. While some are calling it a blasphemous act, some anti-national, there are still others for whom it’s a war. Jokes apart. The Biryani lovers on social media are absolutely hating this idea of Pasta Biryani and the chef is receiving some real harsh criticism for toying with the emotions of the die-hard fans of the Mughlai and Awadhi delicacy.

As soon as one of the Twitter users put out about Pasta Biryani, Twitter just couldn’t keep calm. As bad as its name sounds, the ‘re-invented’ dish looks equally unpalatable. While people still cannot understand what could have gone wrong with the chef’s mind, they are just unable to fathom that their biryani was made to go through all this. Not just that, the restaurant called Pune Food Factory serves this Pasta Biryani,  in question, with an oregano raita. The chef totally seems to have an Italian hangover. (*rolls eyes*)

Needless to say, the sentiments of Biryani lovers were hurt. Here are a few Twitter comments:

Was wondering which city to annihilate in next thriller novel. Congrats to Pune. https://t.co/IBcQBDIZ9W

Whoever proposed the idea clearly had a blank mind. Makes no sense just like singaporian rice.

WTF !
To the Phucking Inventor pic.twitter.com/PkePz2UJkH

Facebook wasn’t behind. Someone put out a photo of this brilliant invention and the comments started pouring in. 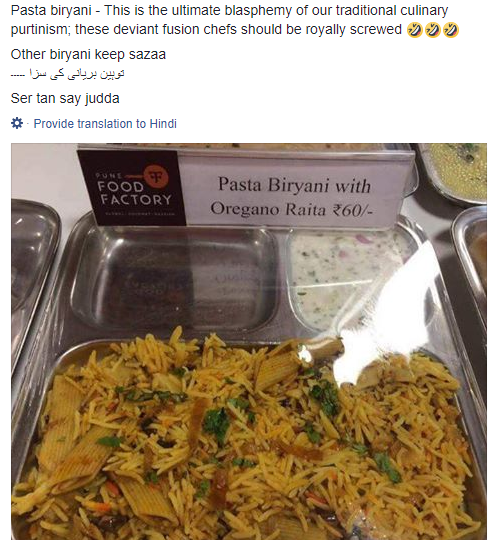 We still cannot digest the mere idea of a Pasta Biryani. Can you? Do share your thoughts in the comments section below.