Yesterday, Priyanka Chopra was just about a few steps away from global domination and she seems to be inching closer to it every day. A meeting with Prime Minister Narendra Modi in Berlin has left her fans shell-shocked and given the Baywatch star another reason to reign over headlines.

While Priyanka Chopra was in the capital city of Germany, Berlin, to promote her upcoming Hollywood debut, she happened to catch Modi, who is currently touring the country as part of his four-nation tour of Germany, Spain, Russia and France. Both she and PM Modi took time off of their busy schedules to have a one-on-one with each other on foreign soil. 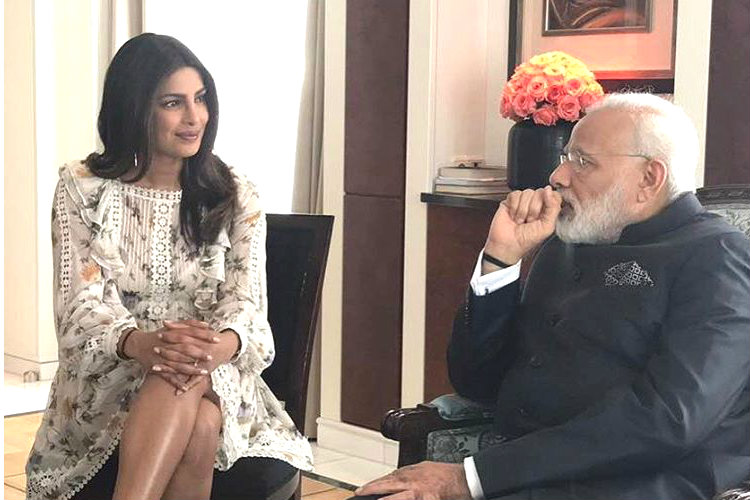 Priyanka shared an image of herself with the Indian Prime Minister with the caption, “Was such a lovely coincidence to be in #berlin at the same time as the Prime Minister. Thank you @narendramodi Sir for taking the time from your packed schedule to meet me this morning.” Now, the photo has gone viral with Twitterati trolling the two with captions of their own. Here are some of the most hilarious tweets shared by Twitter users:

Priyanka Chopra: Would you like some wine?
Narendra Modi: pic.twitter.com/YNfHvquGbC

Indians who are living the American Dream. pic.twitter.com/i4JWBeexaT

v cool that this international entertainer and actor got to meet priyanka chopra pic.twitter.com/C3j6ISEFwU

When she said “mera debut 2002 me hua tha ” pic.twitter.com/xNlUxg9gWV

When your daughter gets 99.5%.
But, you’re disappointed someone got 0.1% more. pic.twitter.com/Dz2bjFMNeS

Tag a gujju friend who will get this joke. pic.twitter.com/yb2IZLmAFg

When you aren’t sure whether it’s time to tell her your Mann ki baat, or not. pic.twitter.com/yMU2Jg6CQA

Modi: When they said I had to meet PC I thought they were talking about Chidambaram. pic.twitter.com/qJ1I8FHRVB

Coming to the theatres near you pic.twitter.com/XH8qxcOogn