Before the reign of Marvel and DC superheroes in the Indian market, Chacha Chaudhary comic books used to be that dope driving us away from textbooks. For a child, Chaudhary’s escapades were like a moth to a flame. So when the Bharatiya Janata Party (BJP) government in Maharashtra released a book titled ‘Chacha Chaudhary and Narendra Modi’, the comic book’s fans thought they had gone too far.

The comics are priced at Rs 35 and will be introduced in school libraries as a separate reading material and is a part of the Sarva Shiksha Abhiyan. However, there’s a problem. As some people have pointed out, the books not only show Chacha supporting the central government, but our Prime Minister is basically seen stealing his thunder, turning the protagonist into a side-character. 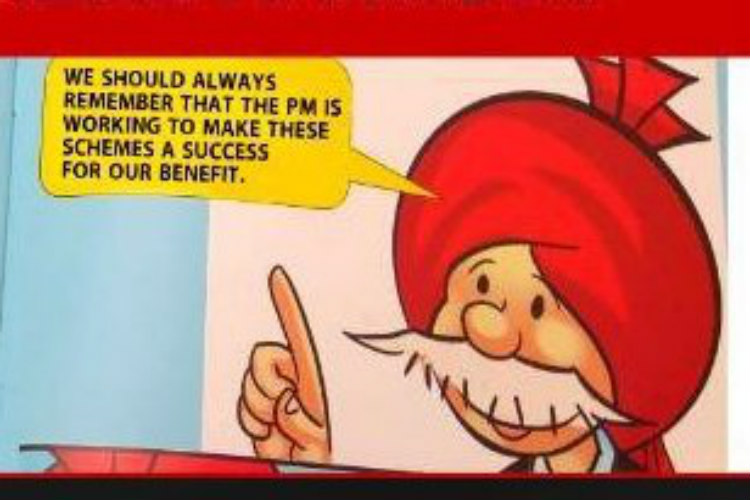 Nationalist Congress Party MP Supriya Sule also raised an objection to the comics at a press conference. She said, “I am happy that through these books the message of cleanliness is given to the students, however, what was the need to use PM Modi’s large pictures on these books?”

People on Twitter weren’t kind to the newly-launched comic book either. Here’s how they reacted:

From Chacha Nehru to Chacha Chaudhary, Modi covers all the Chachas #ChachaChaudhary

All talk and no action

Please… Everyone knows Sarabhai vs Sarabhai–Khichdi was the best crossover

And they said- Infinity War is the biggest crossover event in history.

Don’t give them more ideas!

The spox that BJP that needs, but not the one it deserves right now

That would very much be a disaster TBH

They just made Chacha Chaudhary a side actor in his own comics…what next? Remaking K3G with SRK in Johnny Lever’s role? https://t.co/czyrwCB6NG

Aaaaand, they went there