Journalist Piers Morgan is back at it again.

After taking on India and JK Rowling he has roasted Beyonce’s Grammys performance, calling it ‘narcissistic’ and her acceptance speech as ‘awful’. Obviously, Queen Bey’s fans came to her defense and trolled the journalist and called his tweets ‘a cry for help’.

While the world is awe of Beyonce for her flawless act that celebrated, Morgan felt the other way and tweeted “It seemed heavier on the narcissism than the music.” Beyonce also picked up the trophy for ‘Lemonade’ and said in her acceptance speech that she made the album to confront issues that make us uncomfortable. The infamous journo had something to comment on the speech as well.

He tweeted, “Awful acceptance speech too. Looked bored as hell reading it. Come on Beyonce, you’re better than this. #GRAMMYs.”

Bey’s army didn’t like his comment and defended the singer, to which Morgan replied, “Nobody really thought it was very good, but everyone feels compelled to say it was anyway. Twitter mob rule overrides honesty.” He further said, “Twitter lemmings now exploding with fury that I expressed an opinion about Beyonce’s performance they all secretly agree with… #GRAMMYS.”

Check out what he had to say:

Didn’t really ‘feel’ that Beyonce performance. Seemed heavier on the narcissism than the music.
#GRAMMYs pic.twitter.com/KcUeV4WnSL

@piersmorgan What a shock. Like what an unprecedented statement for you to make.

@piersmorgan I think you have narcissism tattooed on your fat ass

@piersmorgan Beyoncé has earned the right to be as narcissistic as she wants. You were ruined by just one tweet from JK Rowling.

Then he went ahead to rant about her speech:

Awful acceptance speech too.
Looked bored as hell reading it.
Come on Beyonce, you’re better than this. #GRAMMYs

@piersmorgan, Ever been pregnant with twins?

@piersmorgan dude, youre more bitter than a black coffee

He somehow tried to justify his statements:

But he soon realized, Bey isn’t somebody you mess with:

@piersmorgan Reading your tweets to JK Rowling & now your comments about Beyoncé, you seem to have a strong dislike towards women

We accept this tweet as a cry for help. https://t.co/SeYGDwP945

We mean, the man’s display picture is him and Trump smiling towards the camera. What do you expect? 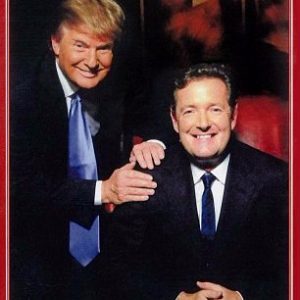