Do you remember how Rachel Green from F.R.I.E.N.D.S gave a list of demands for her birthday which, if not followed, were always exchanged or converted into shopping points? Well then, meet the younger version of Rachel Green, this super intelligent Pakistani girl, who is just 17. She made a contract for her parents which they must abide by all the times or else face a fine of Rs 5000. No, seriously.

Posted by her brother @ZainTaufique on Twitter, her handwritten agreement says, “It is hereby stated as in this letter you MUST agree to any TWO of my requests no matter how selfish they may be. After all, it’s my BIRTHDAY. With respect to that please SIGN here”.

If you think this is cute and adorable, wait till it gets real. The teen stated that if the parents fail to acknowledge the contract, they will be penalised for violation of the treaty. The sassy teen even added her own version of good cop/bad cop by ending the note with, “Good parents never back out from their promise (especially on birthdays) [Univeral Law].”

My sister created this official Birthday gift contract for our parents. It’s the best thing you guys will read today. pic.twitter.com/l7w7mPJf3I

Ever since her brother posted it on Twitter with a caption, “My sister created this official Birthday gift contract for our parents. It’s the best thing you guys will read today.” this treaty note is going viral.

Not just for the girl’s innovatory request, but her dad’s sassiness. Before undersigning the treaty, he made a minor change to the letter. Well, he added a “0 point ” before the 5000. Daddy’s won this round, we’d say! 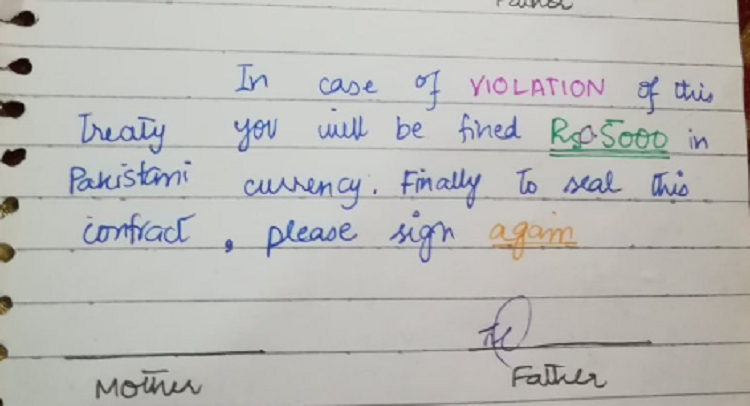 We should all take lessons of sass from the father-daughter duo.