Controversies seem to love the former porn star Mia Khalifa who is one of the most famous and most Googled adult film actresses on the internet. Albeit her short career, Mia has seen a huge devoted fan following most of which are men and is regularly creating waves across the globe for her strings of scandals. From being a victim of religious groups for her career choices in the Middle East to being abused for wearing a hijab during some of her films, nonetheless, Mia Khalifa has tackled every controversy with class. But this time, the woman wasn’t going to take BS from anybody. When a fan forcefully decided to take a selfie with her, she retaliated.

There’s no doubt that Mia is one of the most desirable women in the world but invading her privacy and looking to take a video or a photo isn’t kosher. The 24-year-old model/actress punched a fan who ‘jumped in front of her’ to take a selfie without her permission.

The fan took to Twitter to announce to accuse Mia and posted his picture with his bruised face along with the caption, “Got a pic with Mia Khalifa and she punched me in the face and left a bruise”. The post instantly went viral following thousand likes and retweets. 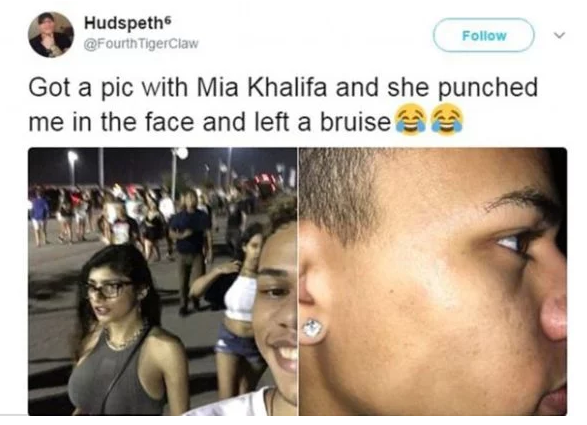 Mia’s fans however where not going to take it without ‘hitting’ back. Speaking up on her behalf, another fan posted her own selfie with Mia where the actress is happily smiling into the camera.

Turns out, Mia was aware of the whole fiasco and took a sly indirect dig at the man with her awesome reply. Replying to the lady with whom she had a selfie, Mia wrote, “You were the sweetest. Thank you for asking me nicely rather than jumping in front of me while I was walking & shoving a cam in my face”

You were the sweetest. Thank you for asking me nicely rather than jumping in front of me while I was walking & shoving a cam in my face https://t.co/1fQK0B5gSi

Do we treat teenage girls like social experiments? This short film is a must watch

Serena Williams’ nude pregnancy photoshoot is perfect, just like she is