Most of us use Ola and Uber’s taxi services for our daily commute through the city and it is only rare that our entire experience from booking a cab to reaching the destination is smooth. Sometimes the driver cancels the ride, sometimes the waiting time is extends over years and for female riders, sometimes the driver turns out to be a creep. But that is sometimes, not every time. A resident of Mangalore (Karnataka), Kavya Rao also booked an Ola for her parents on Tuesday little knowing that they were in for a happy surprise.

As mentioned in her heartwarming Facebook post, which has now gone viral, Kavya mentions that she booked an Ola for her parents because her father had to go to hospital for his regular check-up. Her post starts like ‘Normally, I have a lot of complaints against Ola. But today, I’m here to share a wonderful story.’

Kavya shares how there was no ‘mini’ or ‘micro’ Ola available in the vicinity and that’s when she decided to book an Ola Prime instead. For those who don’t know the difference between Ola Micro, Mini and Prime, the rate per kilometre for Mini and Micro Ola is lesser than that of Ola Prime. Kavya mentions that the driver, Sunil K, arrived in no time. Not just that, he refused to take a rupee from Kavya’s parents after they reached the hospital and told them that he doesn’t charge for hospital trips.

Kavya has posted a screenshot of the cab on her Facebook page, giving out the details of the cab — with its registration number and driver’s name, asking people to help him in any possible way. Her post which has been viewed by over 450 k Facebook users and has been shared by more than 2 k people. More than 1,500 have commented on the post praising and blessing the driver for a gesture, which is so rare in today’s world. 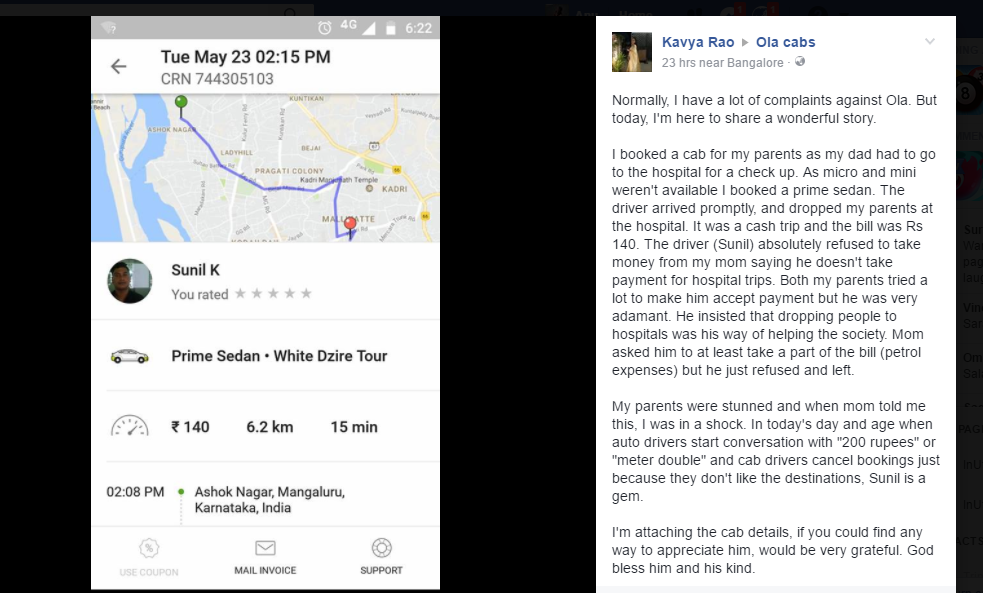 For interesting trending videos from InUth, follow us on www.youtube.com/InUthdotcom