No scientific or medical study has ever been able to able prove that when a man falls sick, his condition is worse than a woman’s. But women would agree that when their husband/boyfriend/any man in the house whatsoever falls ill, the virus ends up making them feel more sick than any woman ever. Where women tend to keep up with their mundane chores, men invariably tend to become incapable of moving when the ‘man cold’ hits deck.

Perhaps a flu is to men what period pain is to women? I mean, how else do you explain the complete inaction when faced with.. umm.. cold? This explanation can well be taken into account but before we jump to our conclusions, let’s have a look at these hilarious tweets coming from some of the women, who have experienced tantrums of their partners, suffering from cold and flu. We bet you just cannot not find this funny.

My husband has a cold & thinks he’s dying. Meaning his throat is sore & he sneezed twice. #mancold

Me and my Husband both have cold and flu
I am working,cooking, cleaning
And his Table has 10K medicines BUT he is Dying!#Difference

I’ll be on my deathbed and my husband will still say, “Oh man. I’ve got the worst cold ever. The. Worst.”

My husband isn’t even sick anymore and we are still talking about how sick he was a few weeks ago.

My husband having a cold is like having 1000 sick toddlers!!! Just shoot me

To fully appreciate what it’s like to live with your husband when he has a #mancold, you have to calculate the time in dog years.

Husband has a cold.
I know because he’s done nothing but complain about it for two hours straight.
If it doesn’t kill him, I might.

Even Urban Dictionary gives an elaborate and hilarious definition of Man Flu: 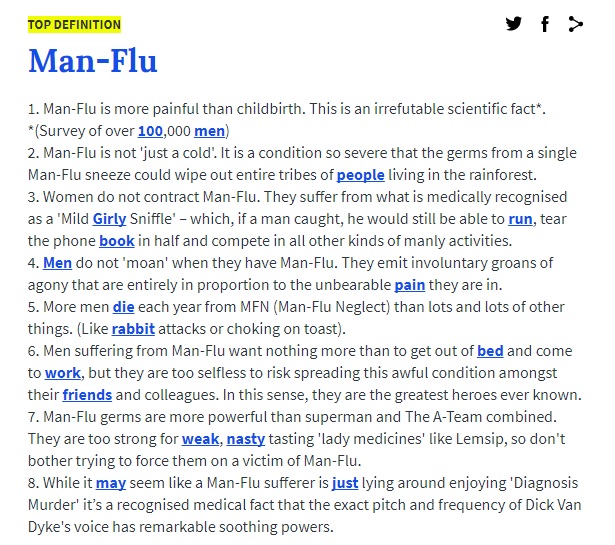