If you know anything about DMRC, you would probably know about the controversy surrounding the reservation of a coach for women. DMRC has been getting a lot of flak from commuters and non-commuters alike who argue that there should be a women’s coach cause there is no men’s coach.

DMRC has broken it’s silence with a sign that hasn’t gone down well with people. The sign claims that there are no ‘real men’ in Delhi: 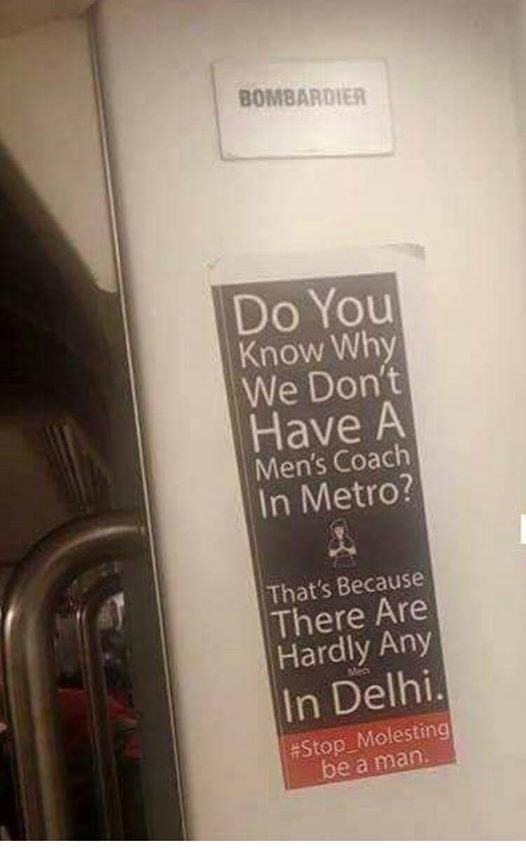 The sign has caused a social media outrage and is being criticized for generalizing all men as rapists and molesters. Not just that, the sign is wrong on so many levels. For one, it not only generalizes all Delhi men as rapists but it also holds all the men who travel in the metro accountable for the actions of a few molesters, men- who perhaps wouldn’t have as much as looked at a woman the wrong way.

Not just that, it coorelates the idea of manhood with molestation and echoes a sentiment along the lines of the sexist notion real men don’t cry which urges men to hold back their emotions for expressing them a subject of mockery. In what can be called male bashing at it’s worst, it not just generalizes men, but also shames them for being born as a gender all because of the actions of a few deranged molesters and rapists.

And what has being a man got to do with the whole ‘ladies coach‘ debate? The fact remains that women’s coach is a privilige and having one in every coach not just rules out equality that feminism is advocating for, but also sends across the message that women require reserved seats for they are not as strong as men to stand on their two feet to complete their journey. This is the very mindset that the patriarchal society has been trying to impose from the get go.

Delhi metro however, is not giving credit where it is due- by generalizing the men, who wouldn’t hurt an ant throughout their lives, let alone women and holds them responsible for the actions of a few deranged ones. But that’s not even the worst part.

Had a similar thing been written for women, say something along the lines “We have a men’s coach because 95% pickockets in Delhi metro” are women, DMRC would have received thousands of letters and requests accusing them of outraging the modesty of a woman and for being ‘misogynist’.

Now that a sign has been put on the hoardings that slams all Delhi men and question their manhood by acussing them of being rapists, there is hardly any outrage because there is no commission to protect their rights.

Why is it that Delhi metro is openely misandrist and getting away with it? Why no mainstream feminists who claim that feminism isn’t about male bashing take a stand against the such blatant display of hatred and extreme bias? Why this selective outrage?