When we look back to reminisce our childhood and think of what we were doing when we were seven, all we see is playgrounds, kiddie pools and TV. A lot of TV.

Chloe Bridgewater (from Hereford, UK) however, has a little more drive than an average seven-year-old.

Fascinated by her Kindle Fire tablet and robots, and totally taken by the idea of working somewhere with bean bag chairs, go-karts, and slides, Chloe decided to apply to Google for a job, and the CEO decided to respond!

Andy Bridgewater writes that it’s a much-needed confidence booster for Chloe, who was “knocked down” by a car years ago. Chloe’s fascination with Google began recently, Bridgewater told Business Insider, when she asked him where his ideal place to work would be. Currently, Bridgewater works in sales for a refrigeration system parts manufacturer.

“And I said, oh, Google would be a nice place to work,” owing to their world-famous perks and all of the cutting-edge work they do, he says. And so, when Chloe decided she wanted to work there too, her father encouraged her to apply and get the ball rolling. 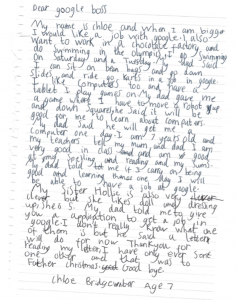 Super cute, ain’t it? Well, imagine her surprise and delight when she got a letter back from the CEO of Google himself, Sundar Pichai, who encouraged her to follow her dreams, adding “I look forward to receiving your job application when you are finished with school! :)”

Read the dad’s reaction on and Sundar’s letter on LinkedIn. 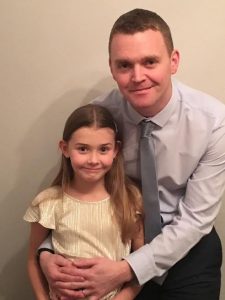 Now, with all the attention garnered from Pichai’s personal response, it has increased Chloe’s drive to work for Google. Bridgewater says that his daughter now wants to go on TV and talk to the media and use that to find some way in to the Silicon Valley-based search company.

He has largely resisted, wanting her to focus on her studies and develop her skills. Except now, daddy Bridgewater wants to brush up on his own technological skills to catch up with Chloe.