Life in the terrains ain’t easy, and it gets tougher if the government doesn’t provide the basic help you’d expect them to. Women from the hills are known to be extremely hardworking and have once again  proved their mettle. How?

As told to TOI:

“Not just the ESZ policy , had women been consulted before large dams such as the Loharinag Pala on the Bhagirathi were built, we could’ve stopped this destruction. Not a single woman along the 100-km stretch was heard on the ESZ,” complains Pushpa Chauhan, gram Pradhan, Ganeshpur village and manch member. 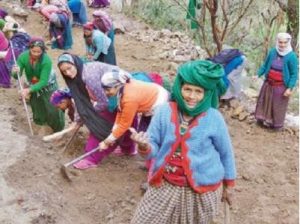 “The key issues for women here are water and forests. Because cattle, farming, fodder, firewood depend on these two. Wild animals destroy crops and attack us every day,” she says.

She points to several permanent landslide zones and dry streams that add to the difficulties. The women at Daang village have found a way to arm twist political parties into delivering. Elderly and young women are building their own road cutting a hill with their hands.

These women will not be voting in the election unless one of the parties helps them build their road.

“Can someone do something about wild animals attacking us and our crops,” she asks.
Wild boar and monkey raids have people on edge and women there do 90% of the farming. They are responsible for water and forest produce and such problems are simply burdening women farmers.

Women in their late eighties, who had earlier participated in the famous Chipko movement of the 1970s, are also a part of this mission and together, they’ve decided that they won’t vote unless one of the political parties help them build their road.