If you’ve been keeping up with Navjot Singh Sidhu’s politics, you probably know that he’s been struggling to make up his mind lately over which party to go with. After causing a huge controversy last year by leaving BJP and keeping the public in suspense, Sidhu finally cleared the air on Sunday by joining Congress ahead of Punjab assembly elections.

Sidhu, for one, has never showed any consistency in his political opinions and has often changed his mind. The man has in fact taken a 360-degree turn, not once but twice since his exit from BJP.

Sidhu was slammed for his blatant hypocrisy by political commentators. In fact, BJP spokesperson Sambit Patra in what can be called a tongue-in-cheek reenactment of Sidhu’s mimicry of AK slammed Sidhu’s double standards on Arnab Goswami’s ‘The Newshour’.

Now that Sidhu has joined Congress, one of his old videos is going viral on social media where he is seen asking Rahul Gandhi to ‘go back to school’.

Dear Navjot Singh Sidhu, we have seen you doing wonders on Comedy Nights and The Kapil Sharma Show. Your laughter is infectious, to say the least. As much as your sher-o-shayari sounds cheesy, we don’t mind putting up with it. But it’s high time you stopped being confused and showed some consistency in your political views. 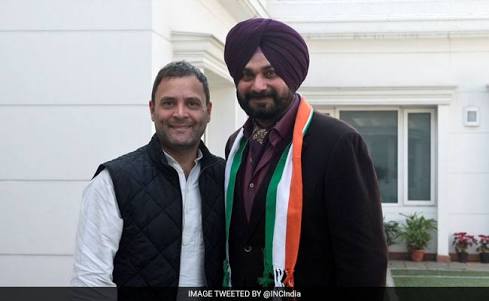 As much as you want your fans to say ‘Chaa gaya Guru’, they are now poking fun at your double standards and can’t help but say ‘Fettay Muh’. All you have to do now to be taken seriously is to choose a party and stick to it and stop joining/leaving parties every alternate day.

Wishing you all the best for your career in politics. Hope your political career is full of highs, so much so that it makes us say “Thoko Taali”.