All hell broke loose on Twitter when Air Vistara posted a picture of its staff with Major General (retired) GD Bakshi on April 21. The airline tweeted that it was “honoured” to have Bakshi on the flight and called him “a decorated Kargil war hero”. 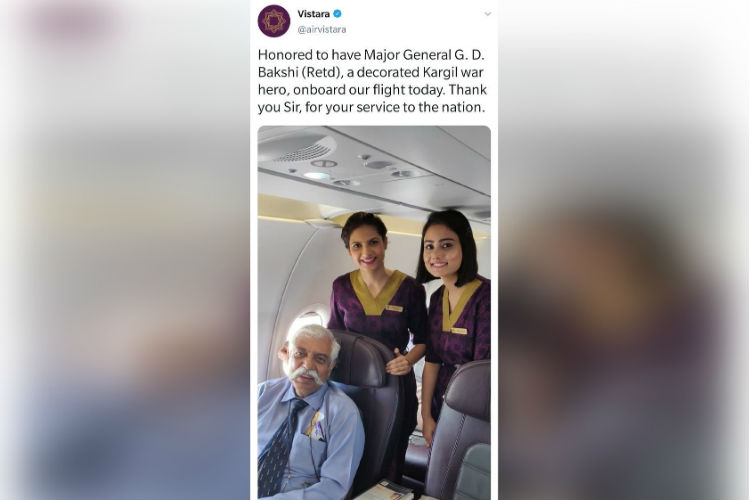 A retired Indian Army officer, Bakshi was awarded the Vishisht Seva Medal for commanding a battalion in the Kargil War. He later commanded counter-terrorism drives in the Rajouri-Poonch districts of Jammu & Kashmir. He also served two tenures at the Directorate General of Military Operations.

He came into limelight for delivering a lecture at IIT Madras in 2016 when he reportedly mocked India’s freedom struggle, called for Pakistan to be partitioned into four countries, claimed that Dehradun was originally called “Dehradrone” and justified the use of pellet guns in Kashmir. He also praised Major Gogoi for tying a voter in Jammu & Kashmir to the bonnet of a jeep and parading him around several villages in 2017.

Soon after the airline posted the picture, people on social media demanded that Air Vistara take down the picture.

I’ve liked the few @airvistara flights I’ve taken. An advice: They should warn passengers if the flight will be contaminated by the presence of a bigot, so that alternate plans can be made. Vistara may be proud of who it flies; others don’t have to share the pain on that flight.

I repeat, GD Bakshi is a disgrace! Vistara honouring this bigot doesn’t change that fact!

Ok Now, I am not flying Vistara anymore. I don’t want to fly with stupid obnoxious bigots.
Thanks.

Sad that Vistara considers honored by presence of GD Bakshi, a rabid warmonger…@RNTata2000

In response, Air Vistara deleted the picture and issued a statement saying that it did not want its platform “to be disrespectful or hurtful to anyone” and that it was deleting the post with the “objective of deleting such comments” that were disrespectful.

However, many were not amused by the airline’s action and started “#BoycottVistara” that began trending on Twitter.

Extremely Cowardly on part of Air Vistara @airvistara to have deleted Major General GD Bakshi Pic after Anti Army Gang Pressure. ITS AN INSULT TO the Army Veteran and #IndianArmy on part Air Vistara #BoycottVistara pic.twitter.com/EAM1ggzMG6

@airvistara very disappointed to check that you have deleted tweet after some anti nationals just opposed!
#Vistara pic.twitter.com/1vBN6eNXrU

I pledged I’ll never ever Fly by Air Vistara for insulting Maj Gen GD Bakshi unless you apologize and restore the Tweet. #bycottVistara

While people exchanged war of words and tried to pick sides, those sitting on the fence found the situation to be funny, especially for Air Vistara.

AirVistara tweets a selfie with right wing idealogy supporting Maj Gen GD Bakshi. Liberals got up in arms & vowed to not fly again with Vistara. The airline deletes the tweet, now the right wingers threatening to not fly vistara again. If nobody is flying, can I get free tickets?

#AirVistara after upsetting everyone in a single day. pic.twitter.com/YjhFNazZTQ