Think haircuts are boring? Think again!
It’s time to leave the traditional methods of hair-cutting because this man in Gaza can give you the hottest style.

A Palestinian barber named Ramadan Edwah, 37, is using “fire barbing” at his salon located in the Rafah refugee camp in the southern Gaza strip. He applies a flammable powder and liquid on his customer’s hair and sets it ablaze with a large lighter before styling the hair with his hand. He uses this technique mainly for hair straightening. Surprisingly, flames often remain on a client’s hair for a while, shaping away at the hair slowly, while Ramadan combs it calmly, brushing away the burnt parts.

Edwan has adopted the blazing technique instead of using blow-dryers, due to the lack of electricity at his salon. The barber then uses a pair of combs to style the hair through the flames until the look is set.

Edwan’s technique has drawn large crowds to his barber shop who witnessed the flaming haircuts. 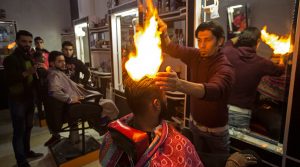 “The idea of fire barbing is old here and we used it for shaving the ear and cheeks. We used this idea for a very long time and with increased experience, we became better.” he said.
Edwan says there are many advantages of adding a little fire to your haircut session.
“It has many benefits for the hair and it’s good for blood circulation,” he explains. “It also feeds hair and protects the roots  is amazing for the protection of hair oils. The degree of temperature expands the follicles.”

Check out his ‘hot-hair’ technique :

Surprisingly, he is not the only barber who uses fire for styling hair. A barber in India is pretty famous for using a similar technique and Spanish hairstylist Alberto Olmedo uses both flames and large swords to give a stylish look to his customers.