Step aside Filmfare! The biggest honor of the year is here. And the lucky actress who gets to have the much coveted (and worshiped) title of ‘Damdami Mai’ is MS Dhoni: The Untold Story actress Disha Patani.

For the uninitiated, Damdami Mai is an honor, a title which the students of Hindu College of Delhi University bestow upon one of the Bollywood actresses every year. The actress who is lucky enough to win the honor is worshiped by the students in hopes of losing their virginity.

Yes, you read that right. Gone are the days when we worshiped Goddess Lakshmi for wealth and Saraswati for knowledge (or Satan for blood of innocent children). The students of Hindu college have taken the meaning of secularism to a whole new level by creating a make-believe goddess called Damdami Mai – the goddess of virginity and sex.

Every year, around Valentine’s Day students of Hindu college have a meeting and decide on a Damdami Mai. The decision is unanimous. A fresher then has to play the role of a pundit and perform a puja to appease the Goddess.

The lucky actress who is chosen not only gets to be the Goddess of virginity but also gets a cult fan following. What more could one wish for?

After the pooja is over, the Virgin tree in Hindu college is decorated with condoms and posters of the actress who plays Damdami Mai. 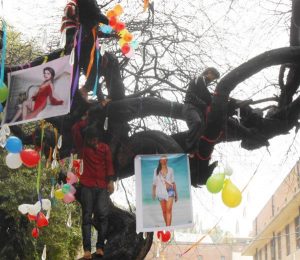 A second year student spilled the beans about the bizarre ritual to TOI:

“We picked her after having a meeting. Along with Disha, one name that was also considered was of Nargis Fakhri, but since most of the guys liked Disha, we have chosen her as our Damdami Mai”.

Nargis was the actress who came close but unfortunately lost out to Disha Patani. The single students who pray find a partner within 6 months and lose their virginity within a year! Isn’t that amazing?

We hope no one trash talks Disha Patani- the Damdami Mai, unless you want to stay a virgin for the rest of your life. Our condolences to Nargis Fakhri.

Also, where do I sign up for this pooja?