It’s no secret that the internet can be a cruel and cold place. The hate comments Donald Trump is receiving from the world have now found a new target – Barron trump. Barron, who is just a ten-year old boy and hasn’t done anything to deserve the trolling, has found himself become the butt of all jokes.

Post the inauguration ceremony, the internet was full of memes and hate comments targeted towards Baron.

Things took an ugly turn when Katie Rich, a writer for ‘Saturday Night Live’, took to Twitter to make a horrible joke on the ten year old. She said “Barron will be this country’s first home school shooter”. She was ‘indefinitely’ suspended from Saturday Night Live after the tweet was posted.

The internet exploded with memes and GIFs mocking Barron:

The GIF went viral with people mocking Barron and Melania for massacring a high-five.

The tweet that cost the Saturday Night Live writer her job. 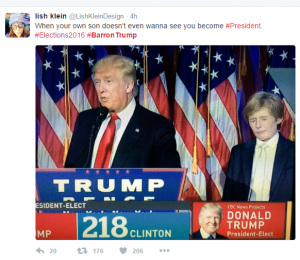 Barron was also trolled last year for being sleepy at his father’s speech.

After seeing all this, Ben and Hillary’s daughter, Chelsea Clinton, took a stand on the bullying and tweeted,” Barron Trump deserves the chance every child does-to be a kid. Standing up for every kid also means opposing @POTUS policies that hurt kids.”

Barron Trump deserves the chance every child does-to be a kid. Standing up for every kid also means opposing @POTUS policies that hurt kids.

We’re happy that she has left all political animosity behind and has stood up for what is right. Don’t you agree that trolling and rooting for Trump to fail is like sitting in a plane and rooting for the pilot to crash the flight. Keep in mind, we’re all on this flight!

Let’s hope the internet gets a clue and stops trolling the ten-year old.