Rape is not easy to deal with and somehow most victims have been known to take to suicide as an after effect of not being able to deal with the trauma. The bullying and stigma inflicted upon the victims by society is unfair and it’s beyond understanding how those who push a rape victim to suicide even manage to put up with themselves later on. It’s shameful how we feel at peace with ourselves after putting victims through such mental trauma instead of helping them get through it.

15-year old gangrape victim Cassidy Trevan, a resident of Melbourne, Australia, succumbed to similar pressure and found it easier to take her life almost two years after the incident. Cassidy was 13 when she was gangraped by two of older boys and worse still the rape was set up by a few girls who did not get enough of bullying her. Her unfinished suicide note has been shared by her mother Linda Trevan with local media and shared her own pain in a heartbreaking Facebook post.

Cassidy’s rape had been reported to the police but the teenager was too scared to put across a formal statement since she feared a lot more retaliation from the bullies. She had to repeatedly change schools but the two other girls bullying her just would not give up and often slapped her while at school. Linda said she had to eventually get an intervention order on one of the bullies when she assaulted Cassidy at a cafe and later called demanding to talk to her. Linda found an unfinished suicide note on Cassidy’s computer which broke the mother even further. 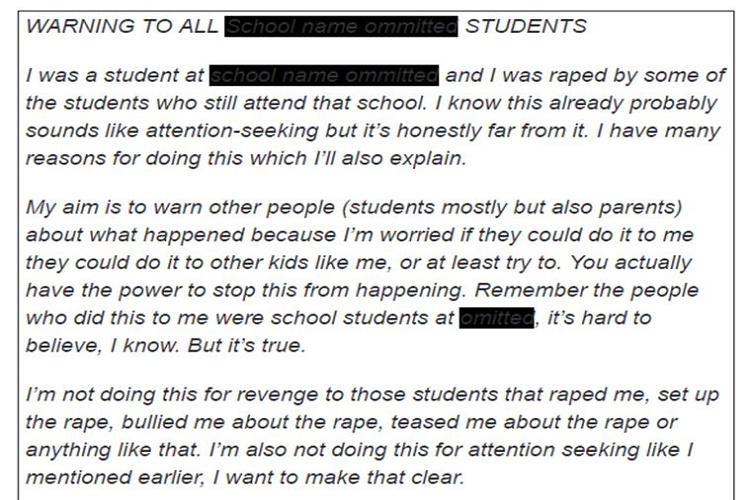 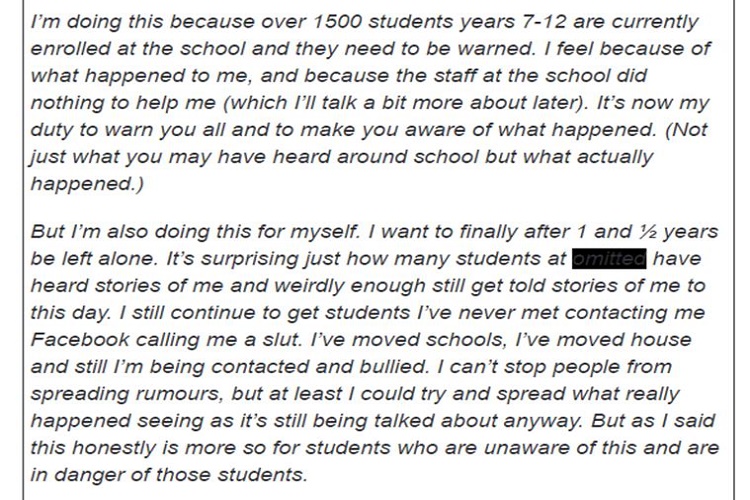 Cassidy’s mother and boyfriend tried for a very very long time to pull her out of the depression she had sunk into but eventually failed. It’s impossible for any of us to understand what Cassidy and her loved ones went through all thanks to some bullies who thought it was alright to take away from her whatever she had in soul and spirit. Linda Trevan, Cassidy’s mother hopes this will raise awareness and give other victims the courage they need to come out and report such crimes. We hope this move by Cassidy’s mother tells victims of rape and bullying that they have the support of people and shall not think twice before reporting such bullies and taking them to task.