It’s only been a few days since the Amazon Indian flag doormat fiasco.  For the ones who aren’t aware, Amazon listed a doormat as one of its products. The doormat had the India’s national flag printed on it.

The product went viral in no time and caused an outrage on social media. Foreign Minister Sushma Swaraj, in a series of tweets slammed Amazon and asked them to remove the product failing which no Amazon official will be issued an Indian visa and the existing Visas will be revoked.

The Canadian website of Amazon soon removed the product following the foreign minister’s threats. However, Amazon USA has listed a product which is essentially a pair of flip-flops with an image of Gandhi and his teachings printed on them. 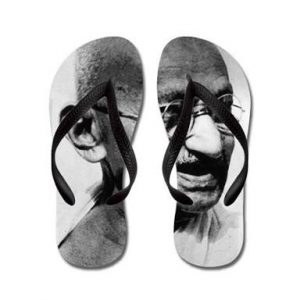 The slippers have been listed under a seller Cafe press and there have been several complaints on Twitter against the blatant insult to Gandhi.

Just when you thought that the fiasco was over and that Amazon had redeemed itself with the unconditional apology issued another product which insults the Indian nationalist sentiments. 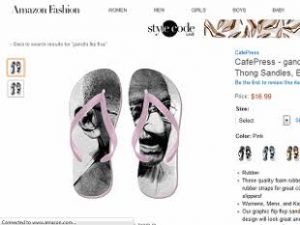 This is the second time in the week that Amazon finds itself in hot water. It’s high time Amazon started reviewing the products before listing them. Amazon being an online shopping portals lists several products that are being put on sale by the sellers.

It’s time that not just Amazon India but all Amazon’s operational units in different countries started reviewing the products that are put on sale by unverified sellers to ensure that no nationalist/religious sentiments are hurt.

In the wake of doormat incident which was a huge insult to the Indian national flag, this move is necessary to ensure that no products which hurt the nationalist sentiments of any nation are listed.

While some people lauded Sushma Swaraj for her attack on Amazon, others accused her of being a hyper-nationalist. While it may seem on the surface that she was being a hyper-nationalist, one can’t deny Amazon’s negligence and the ignorance of the seller who listed product. Ignorance not just towards the national flag of the world’s second largest democracy but also towards the nationalist sentiments of the citizens.

It’s time Amazon incorporated a review system or changed their guidelines and terms of use to ensure that products which hurt the national sentiments are not listed and the accounts of the sellers who post them are permanently suspended.