Bollywood is a really shiny place and sometimes the shine overpowers the goof-ups made by tinsel town. But there are people with hawk like vision who are ready to pounce on Bollywood as soon as soon it makes the tiniest mistake.

Nobody is perfect and we get it. Bollywood is allowed its fair share of goof ups, but we’re allowed to point them out and politely giggle too, right?

Recently, a clip shared by comedian Sahil Shah is doing the rounds on social media. Why? Because Pritam has some pretty awesome teleportation abilities. Either that, or Bollywood has already perfected human cloning and is keeping it a secret from the rest of the world.

This clip made us dive deep into the Bollyland waters and dig out some hilarious Bollywood fails.

Preity Zinta was on the stage and addressed Sonakshi Sinha as Sonam Kapoor. And it wasn’t a one time mistake, she kept referring to Sonakshi as Sonam till she herself reminded Preity that she isn’t Sonam but Sonakshi. Move over, Steve Harvey!

Mona singh played Kareena’s sister called ‘Poonam’ in 3 idiots. In the delivery scene, Aamir screams “Push, Mona” instead of her character’s name ‘Poonam’ and post the scene everyone refers to her as Mona. What’s up with that, director saab?

Check out the scene here

Anjali sends 8 letters to her daughter Anjali that she is supposed to read each year till the age of 8.
Hold up. You’re telling us little Anjali could read at the age of one? Somebody give her a cookie!

There is a scene in the movie where SRK gets a Christian burial.

Plot twist. The very next scene is his ashes being thrown into the river.

Umm..the other door is right there. Just saying.

Also, this happened somewhere in the 90s. Not an error but it’s definitely…something. 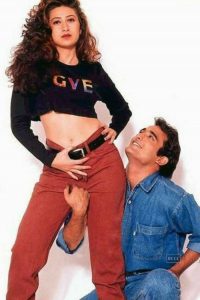 A true Trump follower, Akshay was grabbing em by the err..crotch before it was cool.

Have you seen any Bollywood errors that caught your fancy? Tell us!