All plus-sized women are quite used to being body shamed. It is as if that people can imagine how to accept people who are over-sized or can’t appreciate women the way they are because we have become so attuned to seeing the hourglass shaped model. The society is hell-bent on ensuring that the women we see are a perfect representation of a model or the version of a model who they seem to believe that it is real. This fashion blogger decided to speak about how she had been body shamed and the kind of online abuse she faced for wearing a bikini in an article in Vogue.

In an article titled “Why Everyone Is Wearing This Bikini Style Right Now”, Callie was featured alongside American models Bella Hadid, Kendall Jenner and Ashley Graham. In a teary-eyed video, Callie Thorpe explained what it felt like to read the comments on her photos and other posts about her interview.

For her being on Vogue was a big deal, but her online trolls had other plans for her. The intensity with which they body-shamed Callie was downright abusive. She was barraged with fat-shaming comments in a way that can break the mettle of the hardest of rocks.

There were 900 comments and pretty much all of them were vile. It was just the worst thing I’ve ever read in the whole five years I’ve been blogging. I couldn’t get it out of my brain at all. In the night I couldn’t sleep because of some of the things I’d read about myself.

The video itself was a target for online trolls, where people began thrashing Callie unnecessarily. Later on, she had to disable comments in order to stop the endless tirade of hate. But her critics weren’t dissuaded that easily. They began posting vile comments on another video of the blogger’s from calling her names to labelling her as “visually repulsive”.

Good Morning,even though I’ve closed comments on my abuse video I woke up to this message on another. But don’t worry, this time I replied. pic.twitter.com/RgcWh0KwiX

Well this is wild, I have been featured on Vogue with actual celebrities like Selena Gomez, Kendall Jenner & Bella Hadid no big deal _ vogue.co.uk/gallery/summer_

A little ray of hope came when Callie’s Instagram followers praised her and the British edition of Vogue for promoting body-positivity. And these lovely comments seemed like a refreshing start. 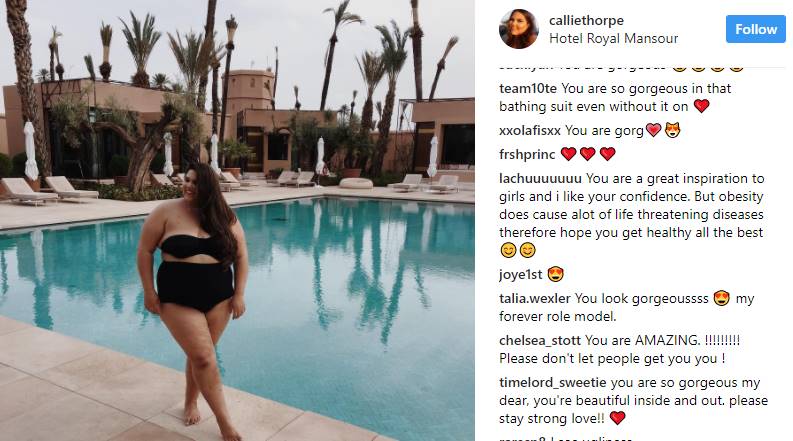 Her video titled “Dealing with online abuse” has now been viewed over 26,000 times and is an empowering message for all the women struggling with obesity and the million other problems of a plus-sized soul.