Gender inequality has been a subject of much debate in our country and while Bollywood tends to reinforce gender stereotypes (read: item songs), Elle has managed to break stereotypes with their #UnGender series.

Elle released a video a few days ago that captures the daily struggles of Indian women in a gender-unequal society. A woman is sitting at home working on her laptop when she hears the doorbell but before she opens the door, she carefully wraps a scarf around her neck, because… well, cleavage.
The video is all about the male gaze. It shows women in everyday situations – at work, at home, in a cafe, driving a car – and how they are forced to ‘cover up’ because the judgment and stares of society are omnipresent.

Although the video seems to stereotype working class men by suggesting that all they do is staring and leching – it’s relatable for most women. It subtly shows the discomfort that women feel when it comes to society’s rules about what parts of their bodies should be covered (and in what ratios).

But alas, here’s sad reality. The video saw a bunch of comments which single-handedly defeated the purpose of the video: 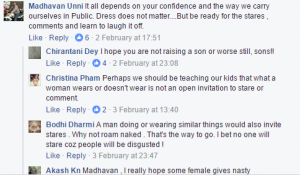 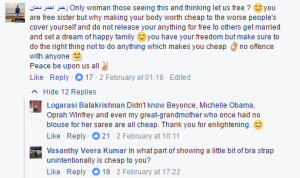 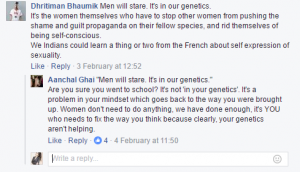 Which brings us back to the point of gender equality.
This video is not about wearing skimpy clothes and it is not trying to say that women want to display their bodies. What someone wants to wear is completely their choice, irrespective of their gender.
What the video highlights is that women in India are not given a choice on whether they want to cover themselves up or not. Being stared at is a common problem that most Indian women face.
But no, it is also NOT okay to stereotype men and call all of them lecherous. Gender equality is not about women being better than men, it’s about them being equal.
This comment sums up gender equality and we couldn’t agree more:

No, men are not special and neither are women. If we could all just get off our high horse, it’d be great.