Ed Sheeran finally got together with James Corden for his much-awaited Carpool Karaoke and it is, without a doubt, everything you would have hoped for. The 26-year-old singer joined in for the popular segment of The Late Late Show with James Corden where he talked about not having a mobile phone, Corden’s bad songwriting skills and hitting Justin Bieber in the face with a driving wedge.

As soon as he sat down in Corden’s car to fetch his guitar, the two started jamming the singer’s Shape of You but the song turned out to be so sexy, Sheeran couldn’t help keep his hands away from Corden’s nether regions. To shake off the sexiness in the car, the two got into a competitive spirit over a game of ‘Who can stuff the most number of Malteasers in their mouth’

While Corden almost choked on Malteaser #26, Sheeran owned the show with 55 of the chocolate confectionery sitting perfectly inside his mouth. 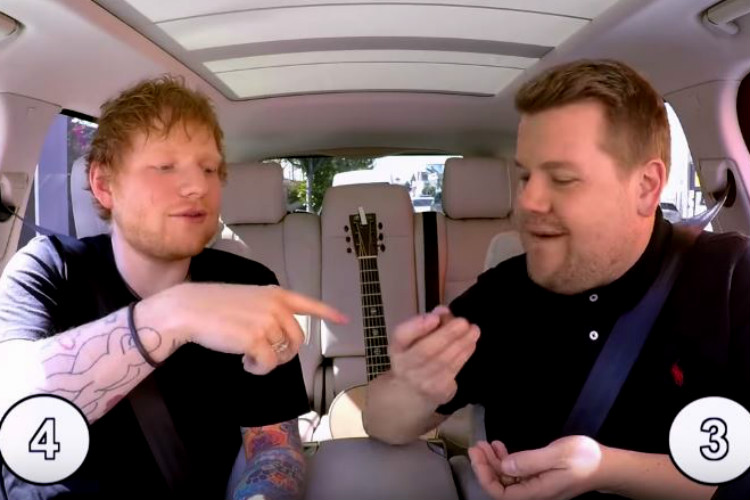 Now, on to the best part, Sheeran proceeded to recount a certain tale of a drunken adventure with Justin Bieber that he had in Tokyo. While visiting a dive bar in the city, the duo headed off to a golf course where Bieber placed a golf ball in his mouth before asking Sheeran to prepare for a “tee off”. Instead of hitting the ball, Sheeran hit JB’s face instead but, what all would you expect from a drunk man?

With several other hilarious stories to tell in between melodious songs, this Carpool Karaoke is just 13 minutes of pure entertainment. In case you feel like recreating the video, here’s a list of the songs that Sheeran and Corden performed:

What Makes You Beautiful

Castle on the Hill